Olivia did her first set of gymnastics classes this summer! Big perk of being three. Gymnastics! She was nervous about it when I asked her if she wanted to sign up.  I was so proud of how brave she was.

Her teacher was Miss Missy and her class was small which was really nice with this being the first time she's done gymnastics or really anything like this.

First class was a little rough.  Probably partly because we actually missed the real first class where if they do any explaining that's it.  We were out of town.  Signing her up I knew that she was going to miss a few classes but I wanted her to do something.  Especially since preschool was coming and I thought this would be a good adjustment into it.

So first class.  She was nervous.  Olivia does not do strangers.  She's so shy.  So walking in and leaving her wasn't going to happen.  But parents aren't supposed to come in.  So we watched at the door for a while.  Then I tried handing her off but that was so not going to happen she didn't even leave my arms before she got hysterical.  I tried bribing her.  I got frustrated.  Told her we'd leave.  This girl of mine she is going to teach me something with her quiet need to adjust to new situations in her own time.  It took me until the end of the first class to realize she's just going to need to do things her way and the best that I can do is let her and show her I'll support her through it.  It was just so hard.  She was terrified to go in.  But when I'd ask her if she wanted to leave and if we should cancel gymnastics she didn't want to do that either.  She so desperately wanted to do it while at the same time being completely afraid of having to go by herself.  She did finally go in.  At the very end.  The last ten minutes.  Because they were doing the trampoline and Olivia LOVES the trampoline.  And those ten minutes.  She loved them.  It was so awesome.

I think she did six classes altogether.  Or maybe more.  I'm not sure.  We missed a few.  And then made a few up.  Which was interesting.  One of her make ups she did a couple minutes to warm up and then had a great time joining Miss Kate's class for the day.  Thought she was just awesome.  The second one didn't go so well.  She cried the entire class.  And never did go in by herself.  She was straight up terrified.  I even went in and sat on the mat by her and she wouldn't participate.  Wasn't going to happen in Miss Dawn's class.  Miss Dawn is a lot more strict.  Which could have been part of it.  Funny enough if I could pick an instructor I would pick Miss Dawn because I think she would push Liv farther and she'd accomplish more.  But that so wasn't going to happen.  I mean the class after the one she attempted to make up with Miss Dawn she looked up and saw me talking to her and stopped smiling and didn't look thrilled.  Ha!

It was only a summer session but Olivia rocked it.  And looked so freaking adorable doing so.  My little gymnast. 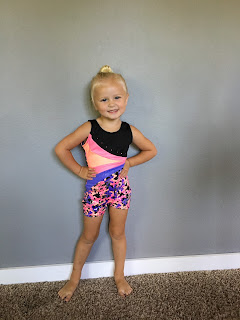 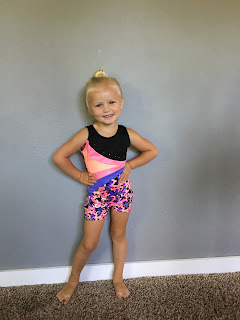 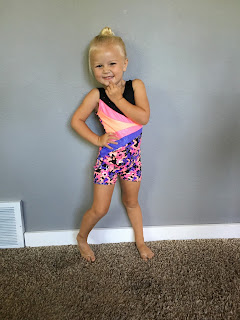 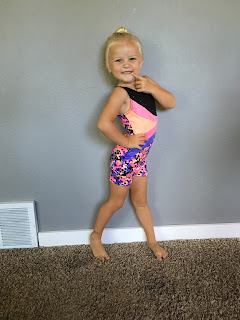 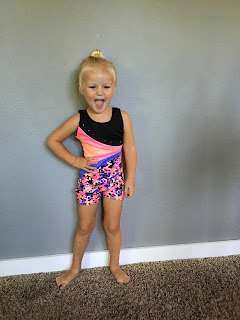 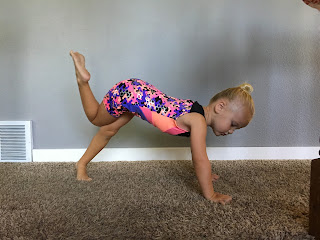 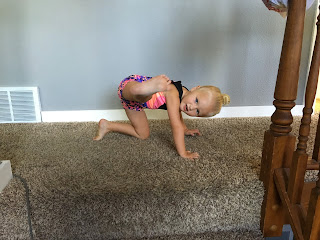 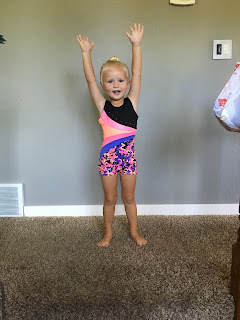 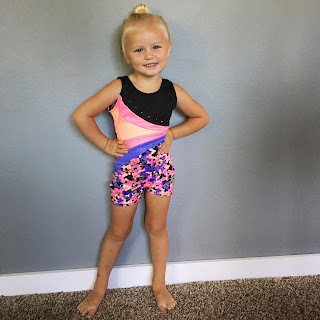 Getting all the wiggles out. 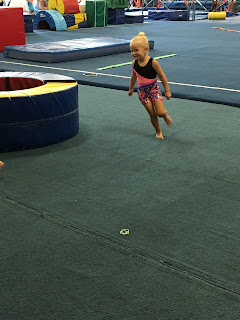 Stretching.  Olivia is so flexible it's crazy!  I watch her and am blown away! 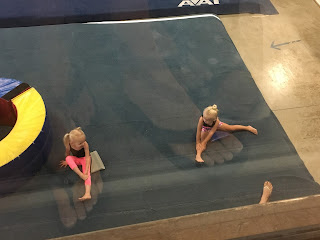 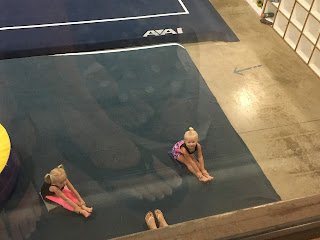 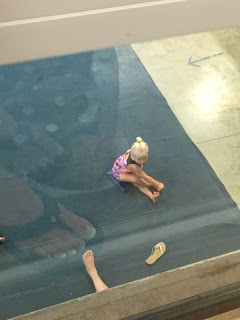 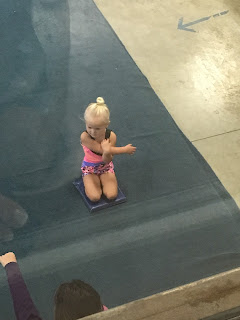 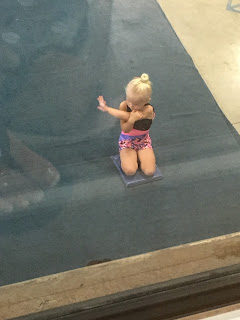 Gymnastics!  Her favorite move.  My favorite is when she lands and sticks her hands in the air and yells "Ta-da!" 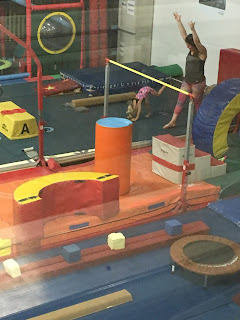 Wearing her princess crown and on her tip toes when they head back into class after a water break. 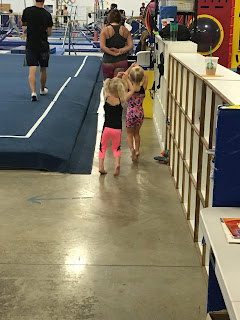 The class was forty-five minutes.  With fifteen minutes after in the tubes and tunnels.  The kids love that part.

I think Olivia's favorite part of gymnastics was the bar that she swings from to kick down the cylinder with her toes.  She was pretty good at it too!  She liked the balance beam also.  But fell on it once and didn't seem to love it as much after that.  I'm hoping she gets her confidence back on that one.

I can't believe how great she did!  Marrissa came to watch one night and couldn't believe how Olivia just ran right in.  All confident and ready to rock it.  In just a couple classes she was so brave!

Her and Miss Missy after her last class. 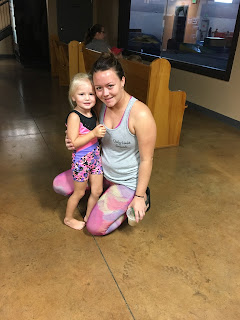