A shitty hike. The shittiest. You'll understand when I get to it.

After the beach and lunch we headed back out and into the middle of nowhere so that we could hike down to a waterfall my parents had hiked to before and told us was beautiful.

It all started out great.  We arrived.  Grabbed what we needed and got going. 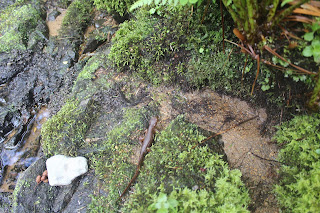 Hiked downhill.  Let's not talk about what a downhill hike means on the way back.  For now it was lovely.  Minus the rain.  But once we got into the trees it was just a drizzle.

Preston did a great job keeping up with the grown ups.  Even Grandpa. 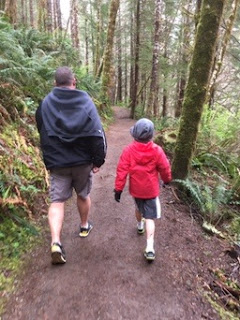 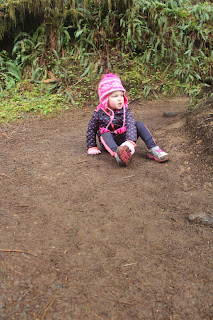 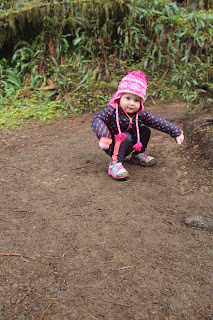 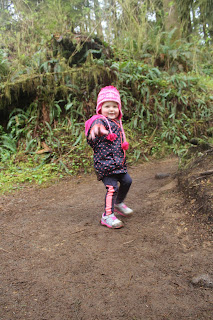 Eventually we were in two groups.  Preston, Brad, my parents, Riss, Gavin, and Madison.  Then me, Olivia, and Jen.  We got so slow that at some point they were so far ahead of us that we couldn't see or hear them.

Not that they missed us all that much.  Having fun exploring. 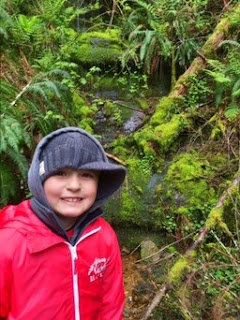 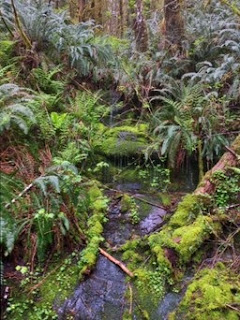 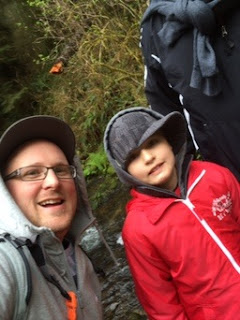 We finally caught up to them after the bridge.  Ha.  Who am I kidding we didn't catch them.  They stopped and waited for us and took some photos while they were waiting. 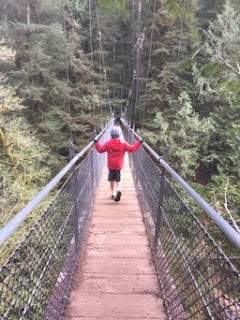 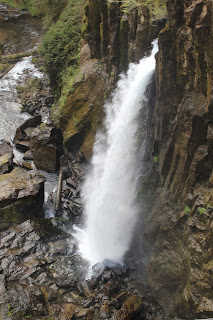 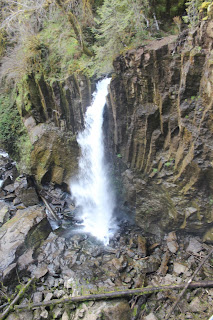 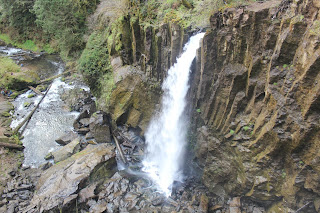 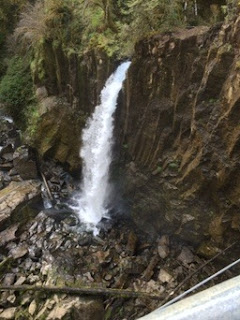 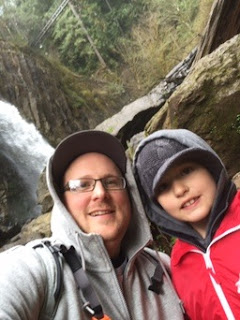 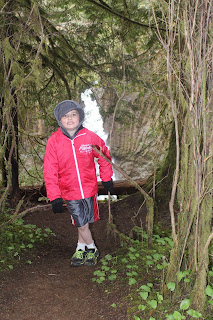 It was there that Brad told me we had a little problem.  Only it wasn't a little problem.  Preston had to go.  And bad.  And not the kind of go that makes it easy to do in the woods.  Numero dos.  We'd asked him before the hike started but he didn't want to use the porta potty in the parking lot.  He said it was too nasty and he could wait.  Now even the nasty porta potty was too far.  And an uphill hike at that.  We gave him his options and he said he'd wait again.

So we continued down to the base of the waterfall. 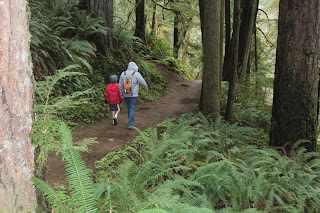 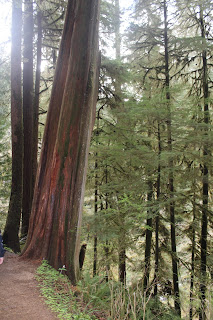 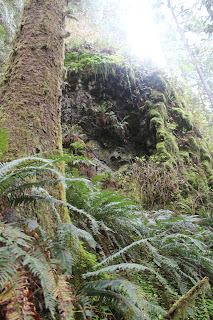 The hike down and the waterfall were beautiful.

But only for a minute.

Once we got down there it became clear that Preston would not be holding it and that instead he would be letting nature take his course in well...nature.  Not going to lie, I was more than a little grateful that Preston is a boy and that means that once potty trained bathroom situations were Brad's deal!

Next problem?  I reached into my bag and realized I'd left our baby wipes up in the car.  By the porta potty.  Not with me.  Not even near me.  And the only person who had anything with them was Jen with her boogey wipes.  And only like four of them.

Beggars can't be choosers and Preston and Brad headed off.

While the rest of us stayed to take a few photos with the waterfall. 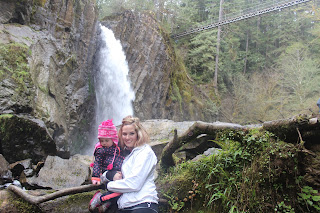 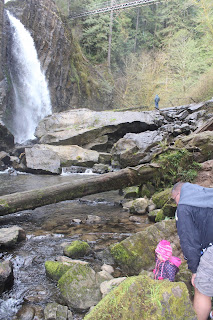 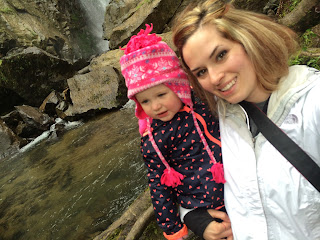 Only thing is that after they left I realized Olivia didn't smell so great.  And we had no wipes.  Like at all.  And it had taken us at least forty-five minutes to get down and the hike back was uphill.

Want a good time?  Hike downhill for forty-five minutes with two kids who apparently have to poop.  I ended up changing Olivia on my lap in the woods.  Using a diaper that I had gotten wet with my water bottle as wipes.

Best part trying to get her to stay still.  Even better when she stepped backwards into the poopy diaper I had laid on the ground.  Like full on stepped into it.   Nasty poop shoes.  Just what I always wanted.

Meanwhile we'd also realized that Brad and Preston had taken off and we had no idea to where and hadn't decided on a place to meet back up and everyone had a total of zero cell phone reception.

Fortunately Brad walked up as I was finishing Olivia's diaper change.

Things weren't pretty where he'd been.  And there were some casualties.  I will not go into details.  I wish he hadn't.

We did have to carry Olivia's poopy diaper back to the car to toss it.  That was fun.

Almost as fun as Olivia deciding she didn't want to walk anymore on the way back.  And having to carry her back uphill.  With poop on her shoes.  While wearing my white (WHITE) rain coat.  Oh yes.  Good times. 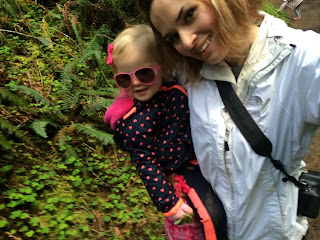 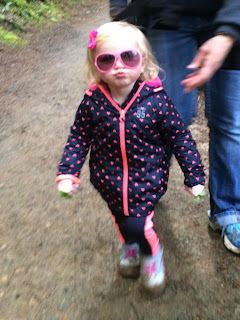 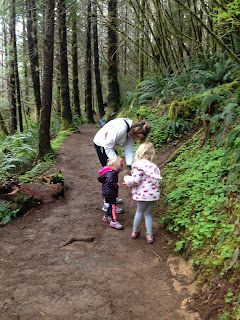 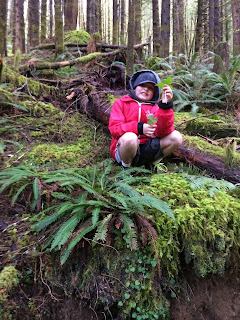 As if things weren't shitty enough, Madison declared that she also needed to use the *ahem* bathroom along the way back.

Cue the mad rush to just get back to the cars and the wipes and the clean clothes and then the house and the ability to sanitize everything.

Do you see now why this was the shittiest hike ever?