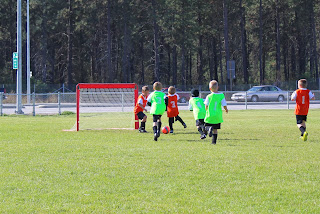 Preston was even more excited about the game because he made a goal! Go Preston! He was seriously so excited! And so were we!

For more reasons than just having scored a goal for his team. We had also promised him a totally awesome new green soccer ball at the last game if he'd scored (you know to get him to stop being a pirate and start being a soccer player) and when he didn't score at that game it carried over to this game.

I'm proud to say he earned his soccer ball!

And the Green Machines are still undefeated!