I hate this appointment. Hate it. But I know how important it is all at the same time.

Liv looked all cute going in.  She was sleepy and trying to take a nap while we were in the waiting room.  Sweet girl. 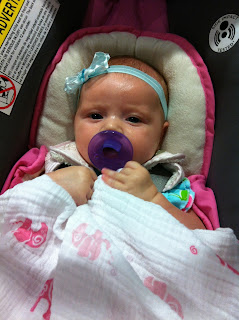 She was not happy about being pulled out of her car seat, having her blankie pulled away, getting undressed, and being put on the scale. 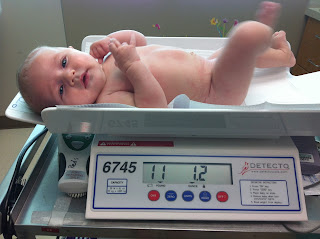 Liv seriously seems so big because really she has gotten so big since she was born, until then I hear how tiny she really is!

We met with the pediatrician and chatted about what you've been up to and any concerns that I've had.  Not a whole lot of them.  Most of them just being little things here and there that I was just not sure if I should be concerned about.  I shouldn't.  These appointments sometimes make me feel like a first time Mom all over again with the things I'm asking!

Then for the part we were all dreading.  Preston included.

Shots lasted all of a few seconds.  But they were horrible seconds.  That seemed to drag on.

You cried.  I cried.  Preston declared the nurse bad.  It was a good time.

I'm also oh and two for not crying during two month shots.  It's just so dang sad!

I just kept reminding myself how important the shots are.  Big picture here!

And that we don't have to go back for more for another two months.

Hurray for the two month appointment being over and done with!