After some debate (in my head) and attempts from a couple of brands, Olivia has found a pacifier she likes. 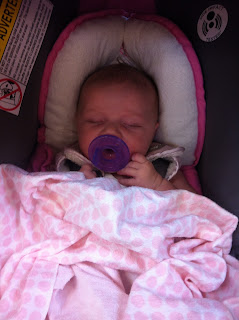 I went back and forth on my thoughts on a pacifier. I'm not against them. I just didn't want to force her to take it if she could live without it.

Preston didn't take one, so the whole pacifier thing is new to me.

But after a couple of episodes where she spit up everything in her tummy because she was using me as a human pacifier, I figured we should give the pacifier a little more effort.

We had originally tried the ortho pacifier but she did not love it.  She would make faces when I put it in her mouth.  Or spit it out over and over.  Before eventually she just cried because it wasn't what she wanted.

I almost gave up after that.  In fact I pretty much planned on it.

But then she spit up all over herself again and would then get all fussy because she wanted to suck but her little tummy hurt from eating too much.

Which was how I ended up standing in the pacifier aisle looking for a pacifier that actually looked like a nipple.

I was hesitant to try it.  But when I did she liked it!

Not a moment too soon either.  Olivia decided she liked the soothie the day we left for Seattle.  I don't even want to imagine how the drive and trip in Seattle would have gone she hadn't been taking a pacifier.

Now we get to enjoy the pacifier...until it's time to take it away.

Honesty that was one of the biggest reasons that I didn't want to give her a pacifier.  I dread taking it away.  And the battle that will follow.  But it'll happen.  Because as cute as I think a baby looks with a pacifier in their mouth, I cannot stand seeing two and three year olds with their pacifiers planted in their mouths ALL day long.

I'm going to go ahead and try to enjoy this whole pacifier thing for now.  Especially since Liv enjoys it so much.  But don't get too attached little girl, this thing has a countdown on it!

So now that I've gotten her to take the pacifier, who wants the task of taking it away in two years?  Any takers?