Olivia had her first doctor appointment.

She was born Tuesday.  Came home Wednesday.  Had her first doctor appointment Thursday.  It's been a busy three days for her!

She weighed in at six pounds four ounces. Not too bad.  She's still within the healthy weight loss.  Putting her in the twelfth percentile.  She's such a peanut. 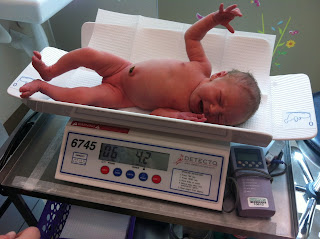 She did not love being naked!  Poor baby!

They measured her at nineteen and a half inches.  Which was wrong.  She didn't exactly shrink.  The nurse said it meant either her or the hospital was wrong.  Having seen both, it was clearly the nurse.  Dang her!

Our pediatrician says she looks great!

How my boys spent the appointment. 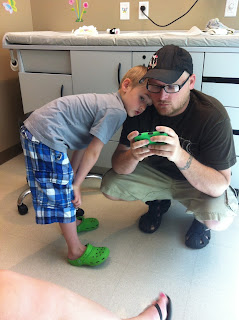 We go back Tuesday next week for her second PKU and a weight check to make sure she starts gaining once my milk is in!