Brad and Preston ventured into Hobby Town for engines for Preston's model rockets and Preston LOVED it in there!  He thought it was just the best place ever!

Which was why we had to go back a couple days later so that he could use up the rest of his good behavior money.  He went in planning on getting a submarine that he had seen when he was there with Brad.  But after much debating while standing in the aisle he ended up deciding on some knights instead. 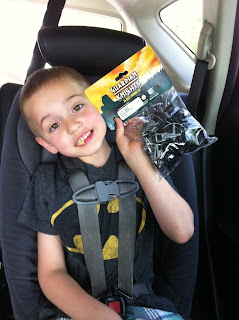