Maternity Clothes: Same thing. I was hanging out in a lot of maxi skirts and stretchy tank tops.

Stretch Marks: Two little ones on both hips. Almost made it. Weird enough, I actually didn't notice them until after I had her.

Belly Button: All the way out.

Best Moment: I got to meet my little girl! Olivia made it to 39 weeks and four days pregnancy before she was over the whole thing and made her way out into the world!

Cravings: I wasn't. Maybe I should have taken that as a hint she would be arriving soon. We had even run out of Sonic ice and I was okay with it.

Sleep: All the way up until the end I was sleeping. Minus the getting up to pee all night.

Movement: Liv had definitely started running out of room in there. She was moving around but it was cramped!

Symptoms: At my last doctor appointment I was 1.5 cm dilated and 50% effaced. No big thing. I thought that meant she'd be hanging out for a little while longer. We were actually starting to talk induction. Clearly she had other plans! Ha!

Emotions: I was determined that she was going to hang out longer. I was going to make it to 40 weeks and then some. Obviously I didn't.

The last pregnancy photo I took: 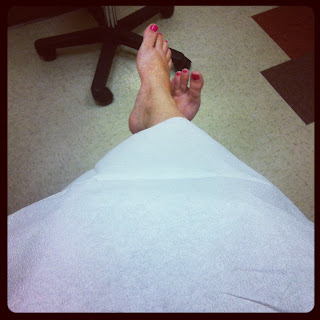 Waiting at my last doctor's appointment.

Next up adjusting to being a family of FOUR!