Preston didn't want to hold Olivia for a little bit. He was nervous because she was so small. I think he thought she was going to come out bigger! Plus he had a little bit of a cough from a cold that was hanging on or allergies we weren't sure. So he kept telling us that he didn't want to get her sick. Such a sweet big brother.

There was the first time that Preston held her.

I had handed her to Brad and run downstairs to switch the laundry.  When I came back up, Brad told me that Preston had held Olivia.  For the first time.  Ever.  And I had missed all of it.

I mean I grew both of them from scratch and then Brad let Preston hold her while I was downstairs for a couple of minutes switching the laundry?!

Oh, but he took a picture with his phone and sent it to me. 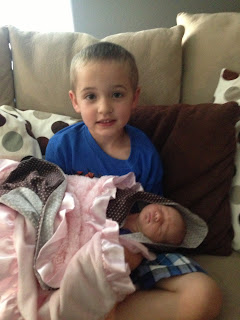 You should have seen Brad.  He was so proud that he'd remembered to take a picture.  And had already sent it to my phone.

When I'd calmed down from the tears and the thoughts of Brad's death I realized that he does miss a lot of moments that I don't.  Because he is working.  Working to make it possible for me to be home.  So that I can be home to see all of the moments.

With Preston being nervous about holding Olivia, Brad could have already gone back to work and missed it.  I could have been the one texting him the photo.

A friend suggested a do over when I was talking about how awful it was that I missed the first time that Preston held Olivia.

So that's just what we did.

So there was the second first time that Preston held her. 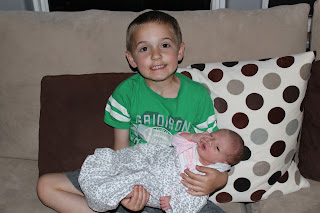 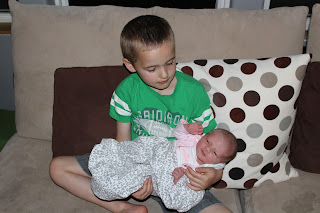 My baby and my baby!