We have been talking about cutting the huge pine tree next to our drive way down for a couple of years. But we've just been talking about it. We got close last year when our neighbor came over to ask our thoughts on the tree. It sits right on the property line. He was all over cutting it down, but I think Brad scared him off by saying they could totally do it themselves. Yeah, no.

Well this year when the neighbor came over to talk to us about it again, Brad told him that we definitely wanted it down and that a friend of his from work's uncle actually cut trees down for a living. One thing led to another and a couple weeks later Brad's coworkers uncle showed up to cut the tree down.

Preston was so excited to watch. I had to drag the poor kid into the house to watch from one of the windows.

This wasn't the first tree we've had cut down since moving in. We had the huge pine tree in our backyard cut down less than a year after we moved in. I watched the company cut that one down and figured I knew how this one would go. Except that wasn't exactly how it went. While watching with Preston I started wondering what the rope he'd tied from the tree to the truck was for. It also kept sticking with me that he'd asked if he could block off the end of the culdesac for about an hour or so. And I couldn't figure out why. But none of it clicked until he pulled out the chainsaw and actually walked over to the base of the tree and started cutting. Whoa! The last tree they climbed and cut the limbs and dropped. It was cut down in pieces. That was what I expected to happen again. Except that wasn't what was happening. He was cutting the whole tree down. All at once.

I freaked out. While Preston watched from the living room window, I made a near hysterical call to Brad at work.

During the call in the midst of my freak out, Preston yelled from the living room that the tree was down.

I run over to the window and sure enough it was down. And hadn't hit anybody or anything. Imagine that a guy who earns his living cutting down trees, cutting a tree down safely. Shocking right.

Since the tree was down, we headed outside to check things out. 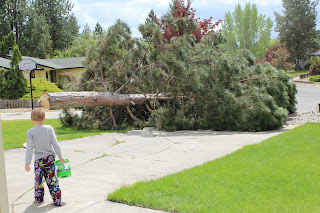 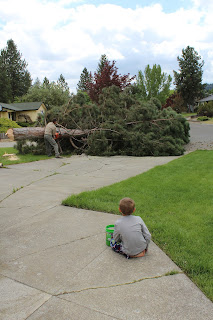 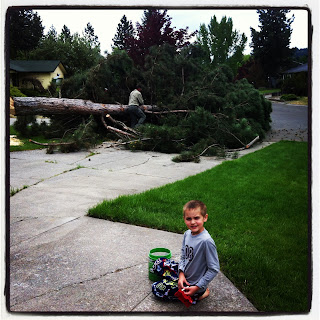 It took another two hours to cut all of the branches off and toss them into the wood chipper and then clean the whole mess up.

Now our front yard looks so much better!!  It only took a couple of years and a couple hundred dollars!

Images shows that the tree was really very huge i think to keep trees in shape or healthy its trimming and cutting is very important so the situations like this never come in the future the best way is to hire good tree removing service company.

Yeah, when it comes to completely cutting down the tree, I'd call a professional first, unless it's a short one.