Preston had kindergarten round up on Thursday!

It is not possible that he is entering kindergarten next year.

I don't know which of us was more nervous. The letter that the school had sent us gave us a day and time to be there. The kids would get to meet their teachers. Explore the classroom. It also said that we would just be dropping our kids off.

Drop him off? With people I don't know? Ummmmm...

He seemed to handle it well. Although he did tell me a few days later that he was a little afraid at first but then he had so much fun that he wasn't anymore. How cute is that!

Also funny that while I was putting on a brave face for him, he was doing the same. My sweet boy.

Mandatory photo op before walking inside. 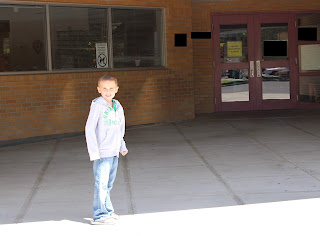 The whole thing really was only a half hour and I waited in the lobby with some of the other parents.

He was so dang excited when he came out.

They had done a sit down with each of the kids, in between showing them around and an arts and crafts project, to check and see what they knew and make sure that they were ready for kindergarten. Preston did awesome. One of the teachers told me that he was just so dang smart! Cue my proud Mama moment!  The teacher mentioned that they had counted for a long time.  Preston told me that he'd counted all the way up to 110 for them.  My boy loves his numbers!  We got sent home with a packet with things to work on over the summer and the things that they had gone over with the kids to see what they knew and whether or not they were ready for kindergarten next year. Preston's had a little note from one of the teachers that said he was totally ready!  My big boy!  Not that I doubted it, but still nice to hear from someone else!

I think we both left feeling a little less nervous about school next year!