Stretch Marks: I think just Preston's still. It's hard to tell. Nothing stands out.

Belly Button: It's out.

Best Moment:  My crib skirt is done!  It looks so freaking adorable in her crib!   My friend Kelly did an awesome job!  Preston's bedroom is painted into his new big brother room colors!  We spent the weekend finishing things around the house and enjoying one of our last weekends as a family of three!  Including a day at the river!

Worst Moment: I've started dilating. What is that?! I was 1.5 cm at my appointment. I was not happy about it. Little lady is under strict orders to stay in until AT LEAST June. I want a June baby! Preston caught a cold. Then I caught his cold. Not the way I thought we'd be spending this week.

Sleep: Not awful at first. Over the weekend I actually had five hour stretches. What! It was awesome. I woke up feeling so refreshed. I'm not sure if it was leaving the window open or just because I was so dang tired from everything we were doing all weekend. But five hours guys! The second part of the week, not so great. My heartburn came back and I've got a cold.

Movement:  She's running out of space!  But she's a little wiggler!

Symptoms: I've started dilating. Boo! Heartburn. It's back. And it was angry. Add in that I've caught Preston's cold and I spent the last bit of this week feeling like crap!

Emotions:  We're getting close!  We're also getting close to being ready!  Having Preston's room painted now makes me feel like it's all going to be done or done enough when she arrives!  I really wanted her room done and his room done and they are both close enough that it's just little touches left!  I'm a little nervous.  I keep telling Brad how we are going from Preston who is old enough now that he is really self sufficient to a baby that needs everything and it's going to be a big change! 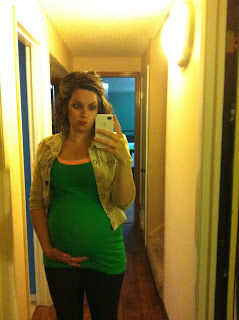 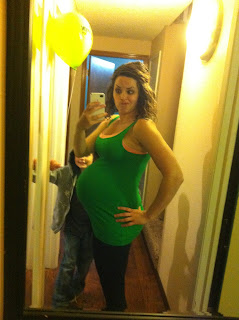