Preston is sick. I should have seen it coming when he woke up this morning. He woke up with sniffles.  But since I'm sick (Did I mention that?  Sore throat and stuffy nose since Monday night), I figured he'd just caught the sniffling part of my cold.  Then we went to lunch with my Mom and nephew and he was cold.  Like abnormally cold.  Which was weird since I wasn't cold at all and usually we're the opposite.  But I still figured it wasn't anything since he didn't feel warm.  What finally clued me in was him saying that he didn't want to go to soccer practice tonight because he was tired and didn't want to move.  He'd been excited about soccer practice and seeing Zack all night.  So I took his temp and sure enough, fever.

Then he passed out on the couch at 8pm.  Oh yeah, definitely sick.

We picked out and ordered carpet for Olivia's bedroom last weekend.  Preston also picked out some carpet for his room.  Unfortunately for him we aren't getting him new carpet since his carpet is only a few years old.  And even if we were, we wouldn't be going with his choice. 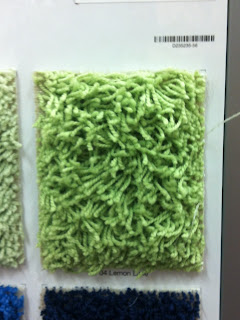 Any guesses as to what his favorite color is?

He wanted to do the same style in pink for Olivia's room.

Preston wanted froyo this weekend and since Brad was home to get it with him, we stopped in.

I love watching how seriously he takes getting to pick out his yogurt and his toppings! 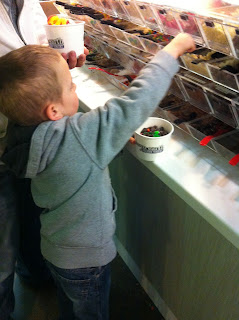 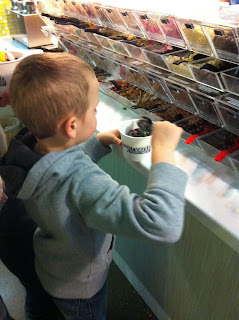 And how much more fun it is to eat his froyo when it's all his creation! 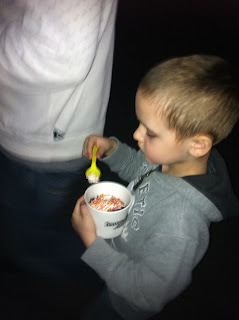 We stopped into the reptile store today (before I realized Preston was sick, when he was still full of energy).  My Mom and nephew had been in earlier and Mason told Preston all about this giant lizard that was just wandering around the store that was super scary.  So of course Preston wanted to go see it.

We got there and Mase was afraid to even walk in without me and my Mom, meanwhile Preston is already at the back of the store trying to find the dang thing.  My Mom ended up asking where it was and the employee was nice enough to bring it back out so Preston could see.

It was a Tegu.  Preston loved it.  Mason still didn't.  Preston was following it around and sitting down on the floor next to it.  At one point even petting it.  Mason was hiding way back behind my Mom and screaming if the thing even turned it's head towards him.  Their two reactions were hilarious! 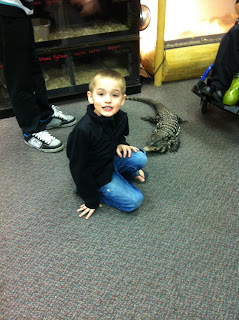 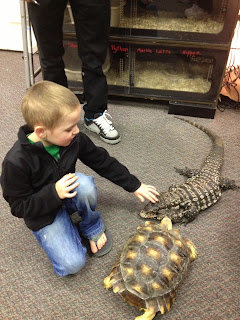 Mason did warm up to it a little bit before we left since Preston was so obviously unafraid of it, so Mason was willing to stand near it before said our good-byes and thank yous and headed out of the store. 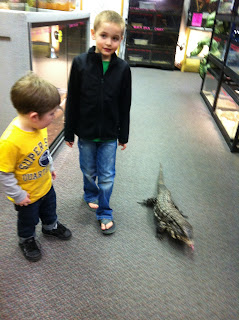 Preston is just so Brad's son.  Mommy doesn't do creatures.  It took everything in me to just stand there and let him explore and touch and just be so near that thing!  Brad on the other hand is totally into those kinds of things and used to have a pet iguana.  Totally his father's son.

Mommy take my picture and use the flash so you can get my kitty and sea otter in it he says. 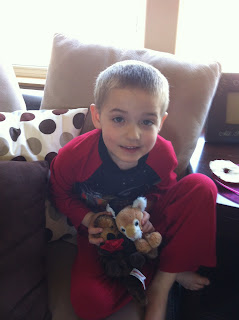 I found this sign when I was shopping with my Mom over the weekend.  I couldn't stop laughing about it and loved it.  So I had to buy it.  And then Preston wanted to pose with it. 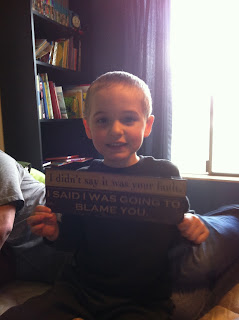 Ever have one of those days or weeks where you realize just how blessed you are to have the people that you have in your life?

I'm in the middle of one.

My Mom brought me coffee (decaf but still!) earlier this week because she was near my house.  And then she took me and Preston to lunch.  To Mexican food even.  Yum!! 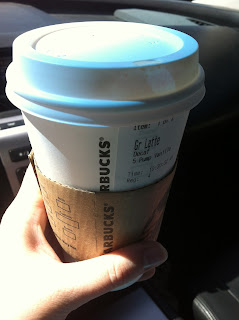 My friend Kelly invited us over for dinner.  Tacos!  And when we got there she pulled a large cup of Sonic ice out of her fridge for me!

Are you noticing a theme here?  The way to my heart is through food and beverages?  Ha!

My husband dealt with and then pretended like it didn't even happen and never mentioned it again when I called him while he was at work and told him about an idea that I'd had for him to change something in our garage and then got irritated that he didn't jump on board right away and hung up on him.  Dang hormones.

My sister-in-law called tonight and left me a message (I'm going to call you back tomorrow I promise, I just thought you might be sleeping by now and didn't want to wake you!) asking me what days she should tell the job she is interviewing for that she needs off for vacation in June so that she can take a week off and come stay with us and help after Olivia arrives and Brad goes back to work.

Oh and this morning, Preston spent a good five minutes telling me how beautiful I am.  Something he has been doing all week!  Love that little boy of mine.

I'm just feeling very fortunate to have the people that I have in my life!

I'm lucky (and thankful) to have you in my life! Dinner and ice is the least I can do. :)