I've been wanting to take Preston out to Northwest Trek for a while. Even more so after a friend told me that it was so worth the drive! Finally we had the chance to make our way out there.

Preston was excited can you tell? 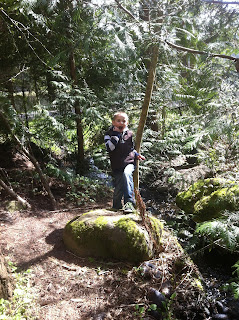 Even more so after he found out that they had cougars!  Who knew!

We scheduled our ride on the tram when we bought our tickets so we had a little bit of time to kill before we needed to head towards the tram.

So we saw some of the animals in the area. 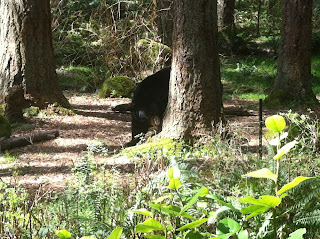 Oh look those aren't bears, that's me and my little boy! 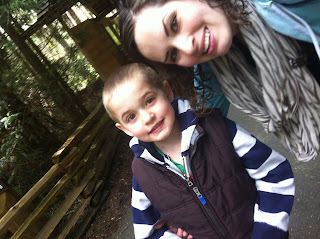 Back to the bears. 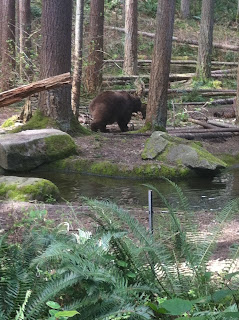 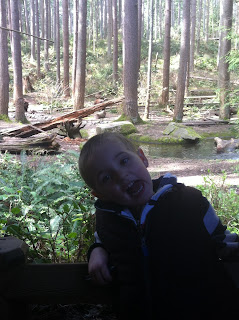 One of the bears climbed into the water while we were watching.  Pretty much made Preston's day.  He loves the water and loves it even more when he gets to watch the animals play in it! 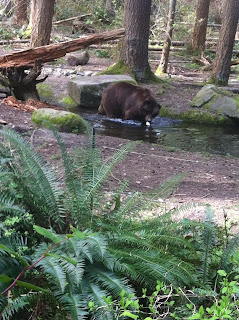 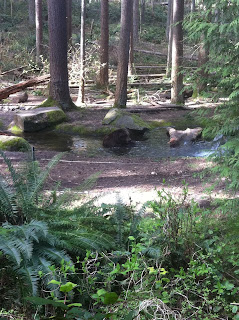 They were both having a good time watching the bears!  And goofing off. 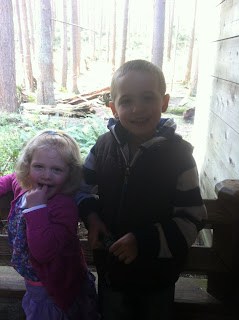 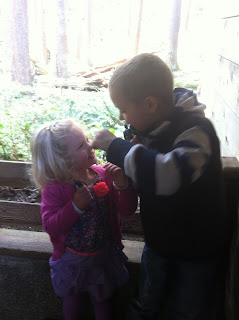 I wasn't sure what to expect from the tram.  It was supposed to be the highlight of NW Trek.  But while we were waiting and hearing the speech they told us there were no meat eaters inside the tram area.  So I wasn't sure how exciting it would be with the animals in there.  Since it didn't sound like they would be all that cool. 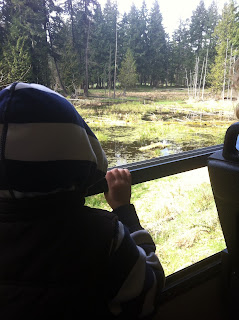 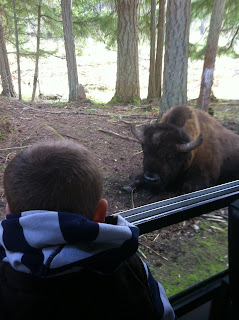 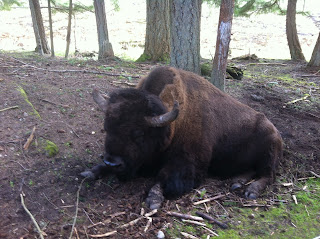 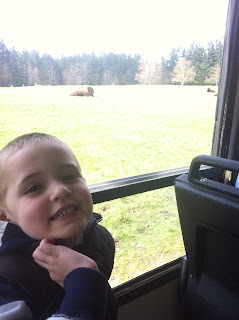 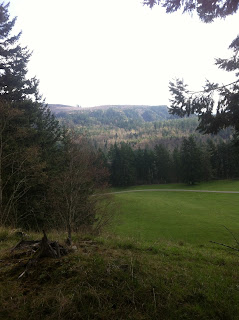 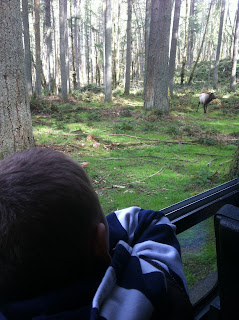 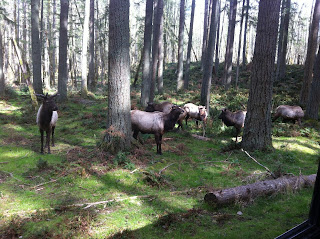 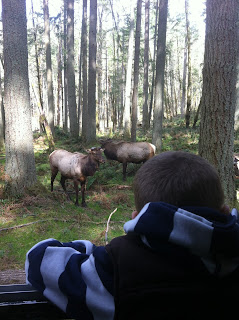 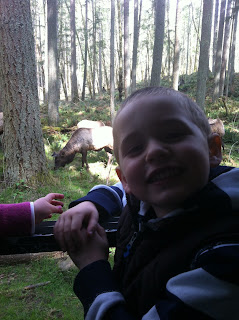 The whole ride took about an hour and was way better than I expected it to be.  Preston was totally into it.  I couldn't believe how much we saw.  I was surprised to hear too that the animals in the sanctuary were wild.  They were allowed free run of the area without intervention.

After the tram the only animal Preston wanted to see was the cougar.  So we slowly made our way there checking out the different things we passed along the way. 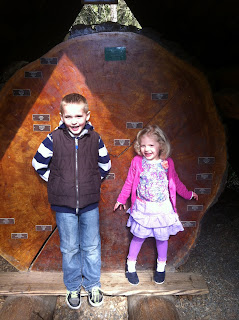 When we got to the cougar habitat it took us a little bit to find the cougar.  It was laying down way in the back half hidden behind a tree.  It did end up getting up and strolling around it's habitat, so Preston got to see it.  But it never got close enough that we could snap a photo.  We did get to watch it spray parts of it's living quarters though.  So that was fun.

They also had a tree in the front with markings on it.  Showing how high a cougar can jump and how far it can jump from and safely land on it's feet.  We were shocked at how high!

We continued to work our way through more of the areas we hadn't visited yet.

The coyotes put on a show for us.  Preston liked that.  We've talked a lot about coyotes since my Mom had them in her neighborhood last year.  So getting to see them up close was pretty awesome for him.  I love when he gets the chance to see an animal up close (safely) that we've been talking a lot about. 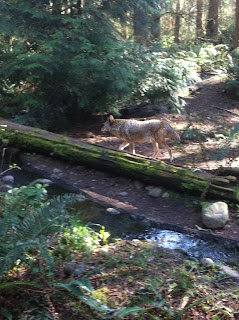 Next up was one of Preston's favorite areas.

We got to see beavers.  One particularly was friendly and seemed to want to play.  Making it that much more fun to watch. 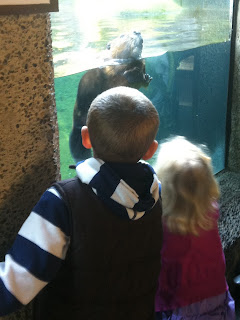 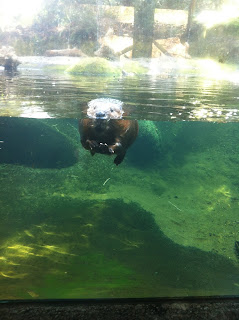 NW Trek had a lot of animals that I was surprised to see.  Animals that most zoos don't seem to consider all that exciting.  But that ended up being our favorites.  Like the coyote.  And the raccoon.  I have never seen a raccoon in a zoo before.  Didn't even know that zoos were interested in having them.  But Preston was ALL over watching this guy run around.  We have these in our neighborhood and sometimes they come up to visit steal the cat food on our back deck and we watch as long and as quietly as we can from the back door.  But they always scare quickly and we are left wanting more.  This guy wasn't scared.  He was curious.  And we could watch him safely from behind the electric fence they had up.  Way cooler than watching from behind the door afraid to move and scare the ones that come to our house from time to time.  I literally had to drag Preston away. 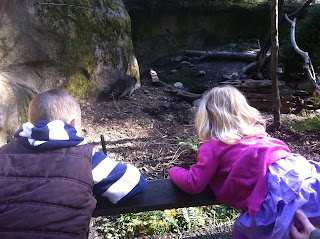 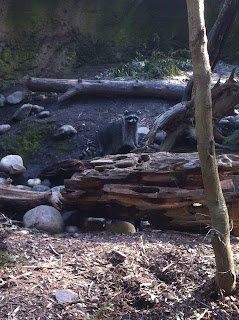 What dragged Preston away?  The wolverine.  It had been sleeping when we passed it the first time.  But it was up.  And walking.  And pooping in it's water and then eating it.  I seriously wanted to throw up.  The raccoon was way cleaner and less vomit inducing to watch!

Preston was also incredibly excited to see the skunk.  He kept talking seeing about it after I mentioned it.  He was so worried about whether or not it would spray us.  But yet he still wanted to see it.  I kept explaining that I'm sure it would be okay and that they probably had removed the part that allows it to spray.  The skunk did end up disappointing to watch.  It just slept the whole time. 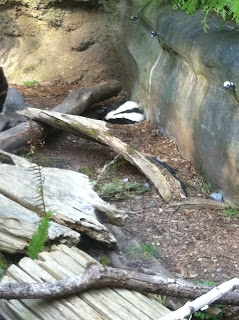 The final animal we saw were the bald eagles.  They are such amazing birds.  It was sad to watch them though.  Both of them couldn't fly.  Something had happened to them that left them flightless and while we were watching one of them kept trying to fly.  It was a little depressing.

Less depressing was the sign we passed by on the way to the bald eagle exhibit.

It was awesome seeing that a company that my family is so tied to donated the exhibit.  Especially with how patriotic my family is!  It just made me proud! 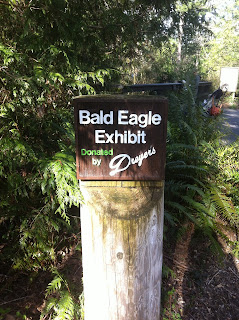 Preston was a little disappointed that we missed out on seeing the snake room since it had closed by the time we got to it.  I think that he got over it though.  We got to see so many amazing animals.  Plus the new cougar he picked out from the gift shop definitely helped.  And if that didn't then the chocolate and Sonic ice on the way back to Seattle definitely did.