Dinner With Grandpa And Grandma

We met my parents tonight for dinner.

Can you tell they were excited to go? 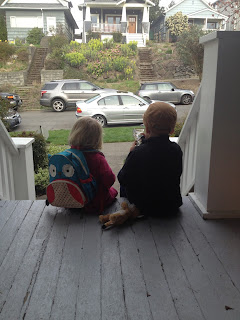 We met my family at their hotel and picked a restaurant.  You would not believe how long it took to pick a freaking place to eat dinner.

We finally decided on The Cheesecake Factory.

And my Dad was super excited to have us take the trolley from the hotel to Westlake Center since he had spent part of the afternoon testing things out and learning about city transportation!

The kids in particular loved the trolley. 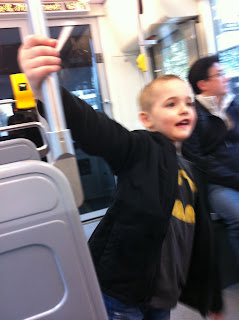 When we got there the wait was forever.  Like a million and a half hours.  It was crazy.  We also had a party of eight right at dinner rush, so I'm sure that didn't help.

What do you do when you have two small kids and a long wait to be seated?  You entertain them.  Everyone took a turn.  My Mom told stories.  My Dad took turns letting Preston and Madison jump to him and throwing them in the air.

Before Preston found the coat closet.  He thought it was awesome.  And would climb in and Mads would close the door and then Preston would pop out.  It was hilarious to watch.

Even more so when Shannon sent him in and told him to yell out, "I've just returned from Narnia" when he popped back out!  Everyone was getting a huge kick out of it.  Including the other people waiting in the area. 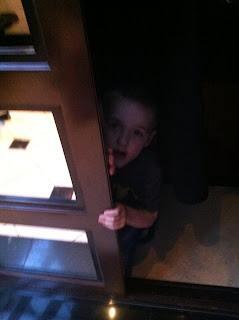 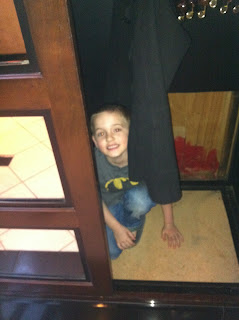 Preston then spent the next five minutes at least returning from different places.  California.  Narnia.  The store.  Seattle.

Finally it was time for us to sit!

Luckily all the fun in the front waiting area seemed to have worn both Preston and Madison out so I put a movie on my phone and Riss loaned them her headphones and we got to have a fairly calm and quiet dinner! Who knew that waiting over an hour to be seated could be a blessing in disguise by the time we were actually seated!

With the wait and dinner and chatting, we ended up missing all of the public transportation that could get us back to my parents hotel where we parked.  So we had to walk.  A lot of blocks.  That's one way to burn off dinner. 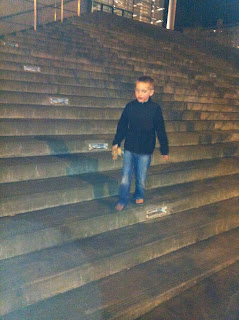 He did abandon me for Grandma at one point too. 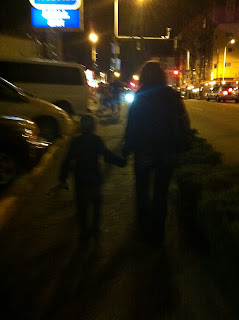 It was later than we'd planned by the time we got back.  But we had a good time so it was worth it!