Day In Seattle With My Madre And Padre

My parents headed to Seattle for my little sister's Spring Break so we all got together for a day downtown. They missed me and Preston so much. Plus they had no idea how to get around on their own. Cue me being a little bit of a tour guide!

We started with the DUCK tour!  It was me and Preston's third time doing it.  And it still is just as fun.  Each time we've done it we've learned something new about the city or seen something new that we haven't noticed before.  Each tour guide gets to create their own tour of what they are going to say so each tour is different! 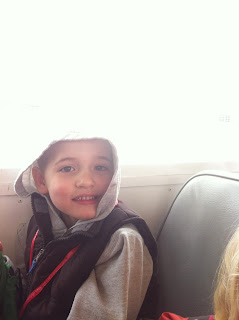 Highlights we never noticed before?  All of the Starbucks.  He had us "cha-ching" every time we passed one and Preston took it very seriously!  There was a lot of "cha-ching" happening.  He also pointed out the saddest place in all of downtown Seattle.  The kids prison.  It was actually a daycare but it was fenced in.  Preston totally bought it.  He was so concerned about that kid prison.  I know that's going to come in handy later!

The water part of the tour is always mine and Preston's favorite.  The city just looks so beautiful! 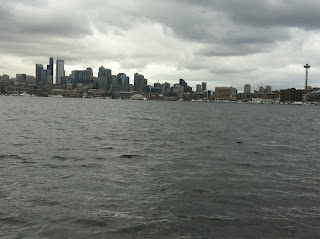 This time we even got to see the draw bridge go up and down for a boat!

Preston and Grandpa got into a quacker war with the quackers that we'd bought.  I'm not sure who won.  But they were both very obnoxious! 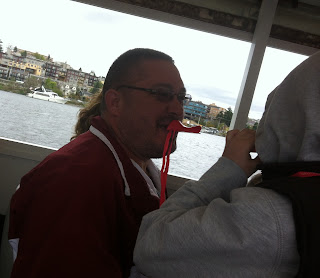 Marrissa did not have as much fun as the rest of us. 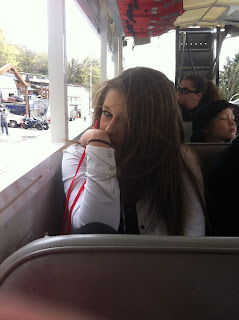 After the tour we headed to the Sports Grill by the courtyard that they modeled Seattle Grace hospital after in Grey's Anatomy.

They have TVs in the booths.  Unfortunately there were too many of us to sit in a booth.  So while we waited for lunch to arrive Preston climbed into one of the empty booths to watch cartoons. 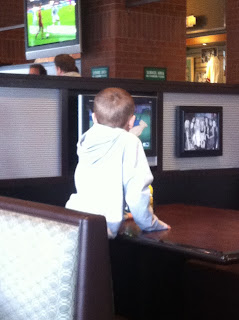 Being that it's a sports grill they had memorbilia all over the place.  We even found a Steelers one.  A little shocking after how poorly the whole state handled us beating them in the Super Bowl a few years back.

Of course we had to take a picture! 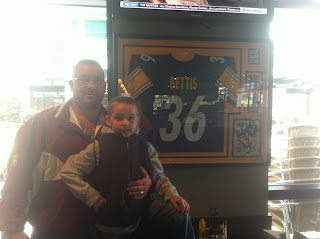 After lunch we headed over to the Space Needle.  Preston has been asking to go up the Space Needle for years.  And we have been putting it off in hopes of going with Brad since he has never been up either.  It never seems to work out.  So when my parents said that they were going we jumped at the chance to go with them.

We started in the gift shop at the bottom.  Where Preston found this little bubble racer toy that he had to have.  And my Mom adopted him a little sea otter lovie.  I was also told by the cashier that I am in fact pregnant with a boy, she could tell by how I'm carrying, and that if she's right she would like me to send her a birth announcement so she knows.  Good times.

Then we headed up to the top! 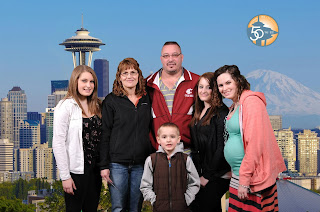 Preston loved the elevator ride up!  He wanted to stand right next to the glass and watch as we climbed higher and higher! 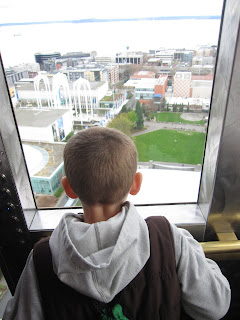 One we got up to the top Preston wanted to head right out to the viewing balcony to look! 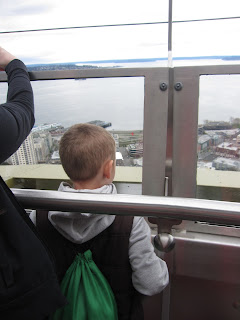 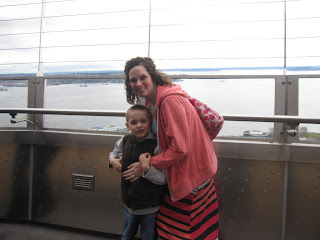 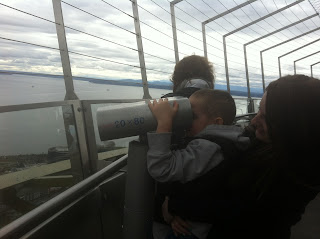 Not even five minutes later he was over it.  We'd walked around the top on the outside and seen the view.  He wanted to go in.  It was windy and cold.  And he didn't see the reason to stay out there any longer.

So we headed in and found a table to play. 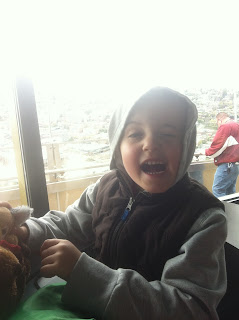 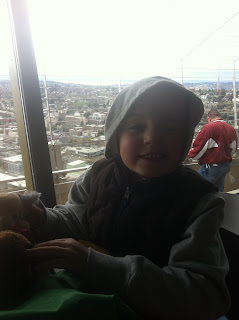 Poor kid after playing inside I forced him to go back out on the viewing deck to take a couple more pictures.  We did not pay to go all the way to the top only to stand outside for five minutes! 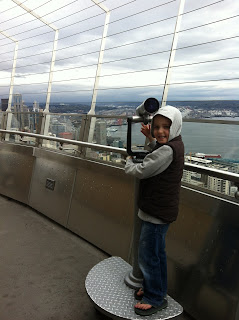 We headed back down after maybe a half hour at the top.  The Space Needle just wasn't nearly as exciting as we thought it would be.  Especially for how much we spent to get up there!  I think we were in the gift shop longer!

I had to move my car since my parking was about to expire and there was no way I was paying for lot parking again.  Preston opted to stay with Grandpa and Grandma and check out some of the shops around Seattle Center while I looked for parking.  I think he had more fun than me.  In fact I know he did.  I came back after driving around having finally found street parking and he had gotten a new stuffed shark from Grandma and a pinwheel from Auntie Shannon!

A stop at Starbucks and we all hopped on the monorail to take a ride over to Westlake Center.  Then from Westlake we hopped on the underground buses on our way to Pioneer Square. 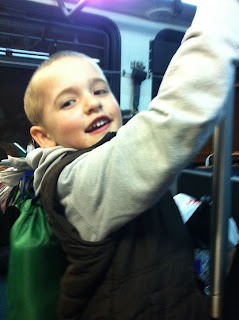 My Dad was so excited and entertained by the underground buses that you would have thought he was teh five year old!  He just couldn't stop talking about how unless you knew they were there you'd never know they were there.  And how awesome it was that he could get all over downtown just using simple public transportation.  A big plus when you don't know your way around and you drove a Dodge 3500 over to Seattle and street parking is expensive and there weren't a whole lot of spots in the hotel's underground parking that would fit the truck.

We got to Pioneer Square and I showed my parents where the Underground Tours met at.  Then we headed over to Magic Mouse toys.  And spent at least an hour.  Everyone was entertained.  Seriously.  My Dad, Preston, and Marrissa spent an embarrassing amount of time playing with all of the puppets.  And my Dad was so into this owl one that I almost bought it for him!

Preston did leave with a new green kitty named Fantasy.  It was a big day for him in the getting of the presents!

A stop at a chocolate shop later and we decided to just explore some of Pioneer Square since it was nice outside.  Preston ended up taking off with Auntie Shannon and Auntie Rissa for a little while when they headed to see a pet shop.  When we called to see where the pet shop was to meet back up with them he insisted that we come inside and see the two cats inside the shop.  My little cat lover.  He is so me and Brad's child. 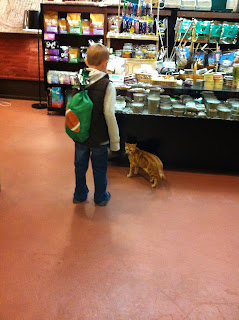 Also side note, how freaking cute does Preston look with his little backpack!  I told him he had to carry his stuff that he insisted on bringing with us and he did all day!  It just kept getting more and more full as he got more and more stuff throughout the day!

Which is how he ended up siting on the bus pulling all of it out and checking out all of his goodies! 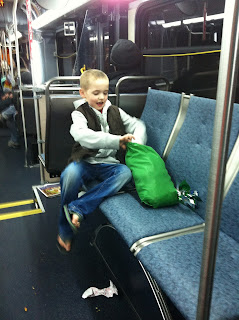 When did Preston get so big?  He walked everywhere with us.  And carried all of his own things!  He's not a baby anymore!

We all had a great day exploring Seattle!  And were exhausted by the end of it!