Maternity Clothes: Nope. But I am wearing bigger sizes. And this week I started wearing maxi skirts. OMG. I love those things. Best article of clothing EVER!

Belly Button: More out than in. But still part of the way in. You can see it sticking out under my shirt though!

Best Moment: I heart Seattle. We've been having a great time exploring, so there have been a lot of fun moments here just life related!

Worst Moment: HEARTBURN! OMG, the heartburn. I had it during my third trimester with Preston and it's making itself known with Olivia now. I woke up three nights with it this week alone. Awful. One of the nights it was so bad I thought I needed to throw up because the flavor was there. Then I freaked out that I was going to throw up, until google helped me figure out that it was just really really bad heartburn. Tums have been my friend.

Sleep:  Good and bad.  We have been so busy that I am literally just exhausted at the end of the night and crash.  I wake up to pee and then go right back to sleep.  I am so tired.  BUT.  And this is a big but, the heartburn makes the nights that I'm up with it rough and not very sleep filled since it's better when I'm sitting up.  One of the nights I spent from like 2am-3am sitting up in bed.  Luckily we've been so busy I had a lot of catching up to do on social media while I was sitting there in the middle of the night.

Movement:  She's busy.  But like I've mentioned I don't notice it as much when I'm not sitting still.  So a couple of times I had to actually stop and sit for a little bit to make sure that she was moving around as much as she should be.  We've just been so busy and on the go!

Emotions:  As we wander around Seattle I keep thinking about how the next time we're in Seattle I'll have two kids.  WOW!  I'm still freaking out a little bit about being ready for her, but calming myself down because we will.  It's just going to happen. 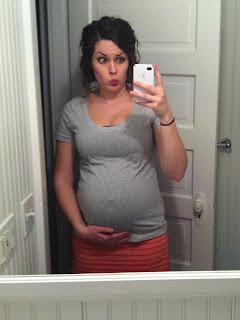 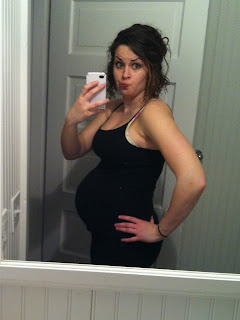 Next up thirty-one weeks!

You should ask your dr about the heartburn. I was still feeling nauseous and having heart burn in the third trimester and after they prescribed me something for if I just felt SO much better, it's really worth it. :)