Our plans for this weekend got a little bit changed. Originally we were going to head to Coulee City to visit Brad's grandparents and see his little sister.

All the way up until Friday night that was the plan. Then at dinner Preston said he would rather go to bed than eat. Which surprised me. I had told him if he wasn't going to eat than he wouldn't be playing he would be going to bed after dinner and instead of getting upset about this and deciding he would in fact eat he told me he would go to bed right now. Then he did just that. Falling asleep even. I should have known right then and there that something was up. But we didn't realize anything was going on until a little bit later when Brad went to change him into jammies and came in to the living room to tell me that Preston felt really hot. Sure enough, he was running a fever.

Thereby changing our plans for the weekend.

So we spent Friday night and Saturday hanging out in bed sleeping and watching movies and reading books and rotating between doses of Tylenol and Motrin. Good times.

By Sunday even though he wasn't all the way back to normal he was fever free and feeling better.

It was nice out and we figured fresh air would be a good thing so we headed out for some Starbucks and a stop at the park.

Can you tell he was feeling better? 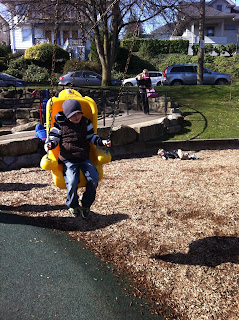 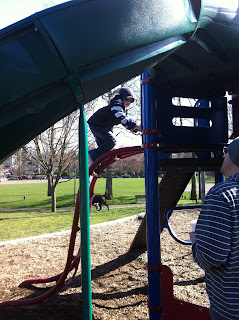 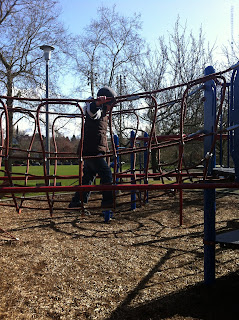 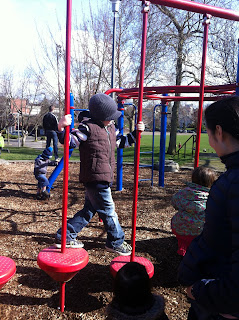 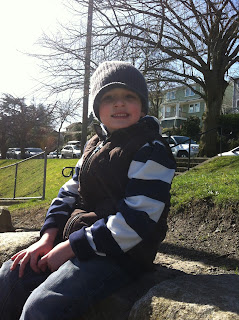 He did take more breaks than he normally would but he was definitely feeling better and having fun at the park.  He used his needing to rest to his advantage and got Daddy to carry him home. 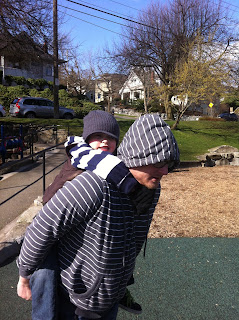 We didn't stay at Jen's for very long after the park.  We had some exchanges to make at Ikea and I knew I was going to need Brad's help carrying things so we decided that since Preston had been fever free for long enough to not be contagious and seemed okay to head there.

It might not have just been Preston and Mads that Brad was pushing on one of these carts, I hopped a ride with them at one point too! 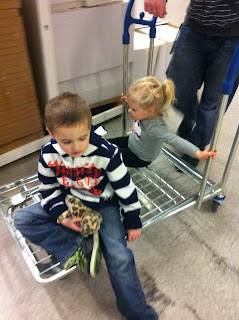 Ikea can be exhausting! 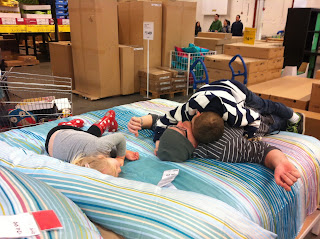 After Ikea we finished off the day with a stop at Target and let Preston decide where to have dinner since we figured he'd been since so now that he was feeling better it was his choice!  Plus with him having been sick he still wasn't eating as much as he normally does so I was hoping eating at his favorite restaurant would help!  It did!

Now we just need to all get some sleep, we have another busy week coming up!