Preston has never been all that into drawing. Never.

I’ve just stopped stressing it and started figuring that Preston is more like me and Brad and not super crafty and creative.

Go figure once I decide that it’s not something I should be forcing on him or stressing out about, he goes and becomes more artsy.

All on his own. He’s been drawing up a storm.

With a toy that I had packed into a basket in the closet full of toys he doesn’t play with anymore.

Last night at bedtime we were drawing on it and he had me draw the moon and then he drew the moon.

Then he drew the sun. And told me to draw the sun. Only I drew mine wrong. Apparently all these years I’ve been drawing my sun’s wrong.

So I had to start all over. I got it right the second time, phew! To celebrate I drew some clouds to go with the sun.

Then put him to bed.

When I came downstairs for bed I discovered that before falling asleep Preston had added to the photo. He filled in my sun. Drew hearts in the clouds. Added rain. And then drew a little boy and grass at the bottom. 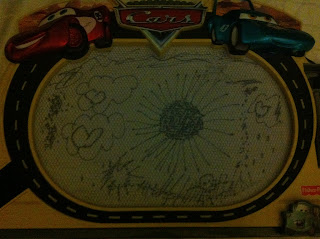 Not to be left out he has also been writing on his Car’s magna doodle toy . Numbers and letters. The other day he surprised me having written numbers 1-5 without any prompting. 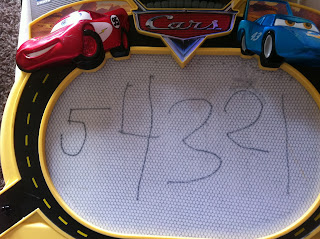 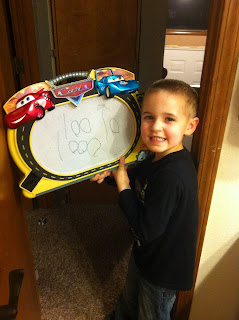 I love seeing this new side of Preston!