A Moment At The Outlets

After whale watching and a late lunch, we stopped at the outlets to do a little bit of browsing. What, my kids needed things. Kids. That is so weird to type!

As we were walking in, Preston had this full on meltdown. Made hilarious by the fact that he was walking in with Brad and it involved a screaming fit and Brad not having a single idea what to do.

I of course did what any Mother who has ever been there would have done. I pretended like I didn't know either one of them and laughed hysterically at the entire thing and Brad's complete confusion of how to handle it and the major drama that Preston was displaying. Can't imagine where he gets it.

I know what you're thinking, not this adorable little boy. 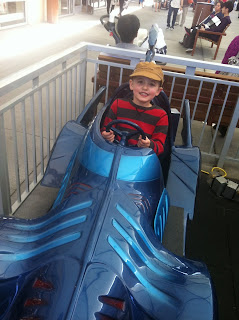 Even harder to believe, that a mere minutes later he was completely back to normal and acted as if nothing had ever happened! Ha! Poor Brad.