Belly Button: Starting to pop out. You can see that it's there under my shirt but it's still part of the way in.

Best Moment: My shower invites went out!! And I finally found a fabric that is pretty much exactly what I've been looking for! Hello baby bedding! And polka dots!

Worst Moment: Not so sure there was one this week.

Cravings: Ice. Specifically sonic ice. It is the world's greatest thing. Even if getting it means taking a drive!

Sleep: Needing it. I am so tired lately. Exhaustion is kicking in! I blame the third trimester!

Movement: She's so active! It's a different kind of active than Preston was. With Preston it was just the two of us, so I noticed every little movement he made all day. Olivia's already getting a little bit of the second child shaft. Since I spend all day with Preston and chasing him around I don't notice her moving around as much unless I'm sitting still!

Symptoms: Leg cramps. I woke up the other day and stretched and holy ouch. My calves started to cramp up and I was pretty sure I was going to die. So no more stretching apparently.

Emotions: I'm a little freaked out. How am I already this far? I thought pregnancy was supposed to seem like it took forever? Instead I feel like it's not long enough! Pretty sure my dr thinks I might be crazy since I told him I'm hoping to go overdue. When I asked about induction (I was induced with Preston) he informed me he would not do it before 39 weeks. Which made me laugh because she can't come before 39 weeks anyways because Mama wants a June baby. He laughed and asked me if I planned on standing on my head to keep her in. So as I get farther along we're going to talk about ways to keep me pregnant instead of ways to start labor! Bet he doesn't hear that one very often! Which would explain his surprise. 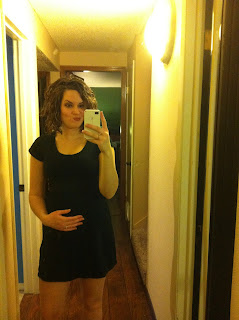 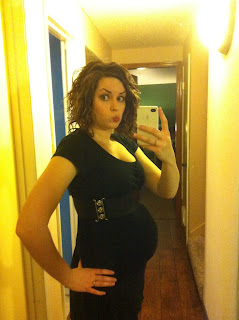 For the record, I did not just wear the dress.  I wore leggings with it.  But took them off at the end of the day.  No way am I crazy enough to wear something that short when all the fabric is being pulled to the front!