When we woke up this morning, it was crap weather. So I planned on doing something inside. I was trying to decide between Chuck E Cheese and the Bellevue children's museum when Brad called to tell me how nice it was in Bellingham.

Now we had to play outside.

Only I didn't have a plan.

I almost loaded Preston and Mads up to head to Northwest Trek.  But luckily I checked their website and found out that they actually weren't open during the week.

When I remembered that there was a zoo in Issaquah that we had never been to.

Cougar Mountain Zoo it was!

Preston and Madison were excited! 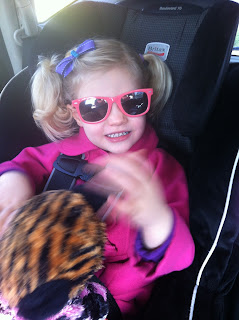 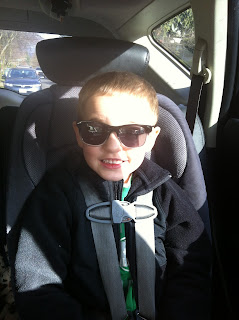 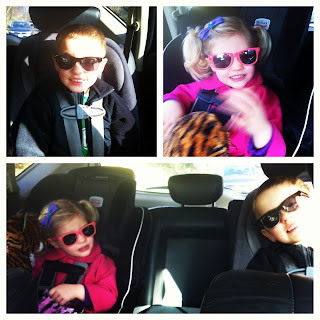 Preston was so excited to go to the cougar zoo.  He has been obsessed with cougars since this summer and wanted to see one in person so bad, the zoo seemed like a good way to do that!

When we got there I was paying and buying food to feeds some of the animals and asking the lady at the front desk a couple of questions.  While I was doing that these two little monsters pushed through the gate and started playing.  First on the little statue right in front of the gate.  And then Preston noticed the giant cage a little past that and had to check it out.  All the while I'm asking them to please hang on just one second while I try to remember which animals we can feed and which ones we can hand feed and please don't go so far that I can't see you.  Thank you.

Finally it was my turn to walk through the gate.

Madison was happily playing on the statue!  Doesn't she look freaking cute? 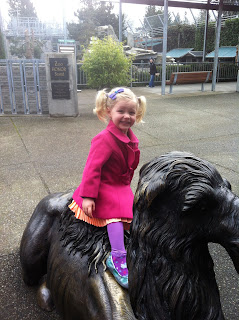 Preston was bouncing around excitedly in front of the cage and yelling to me that he'd found the cougar!  He was overjoyed!

I figured that it was going to be like the other cats we've seen in other zoos.

That tree that is next to Preston in the picture of Mads on the statue was blocking the main event.  So I couldn't see what he was seeing.  I could just see him.  Which is the rule.  He can't go farther than I can see him.  So yay for that!  Preston was sticking to the rules!

I walk up and there is the cougar.  And Preston.  Staring each other down.

I almost died!  And dragged him away to safety.

But I sucked it up and reminded myself of the cage separating the two of them.

Instead I asked him if he wanted to take a picture with the cougar.  Of course he did.

Can you tell he was excited? 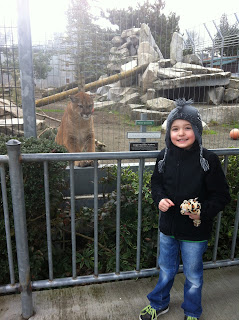 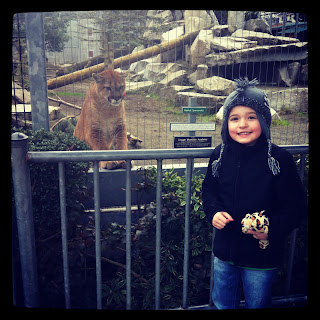 Does it not look like the cougar was hoping to I don't know eat my son for lunch?  Creepy much?  Thank God for the cage locking him in!

Althoguh the cougar didn't seem to have much of a preference over boy or girl meat.  Obviously.  I mean look at how it stared Mads down too! 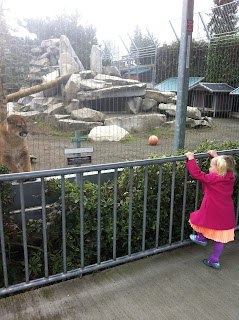 We have been to the zoo a lot of times and seen a lot of different kinds of cats, but the cougar was definitely the creepiest.  At least this one was.  It was actually paying attention to us.  And watching us.  It was interested.  Normally you just go about your way and the animal shows no interest in what you're doing.  Not the cougar.  The whole time we stood in front of that cage, it stared us down.  Really made me not ever want to run into one without the cage! 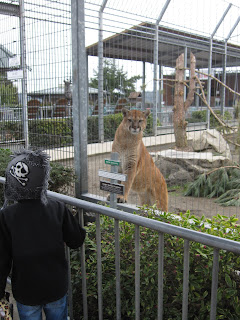 After the cougar, we had to move on to the rest of the zoo.  It was not as exciting.  Not much can top seeing the cougars.  Even climbing on a statue of a kangaroo.  Or a wallaby.  I'm not really sure.  But they climbed it. 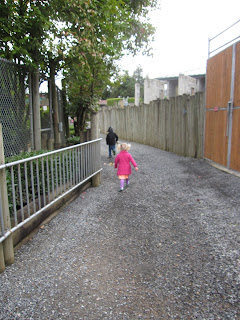 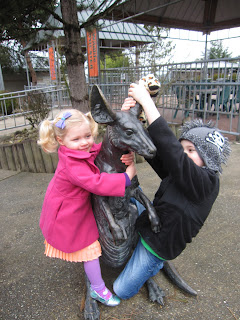 But we did get to hand feed some deer! 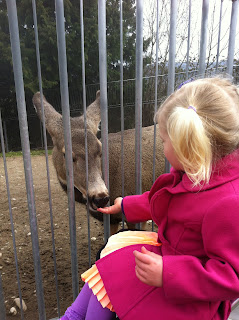 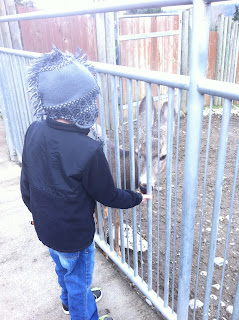 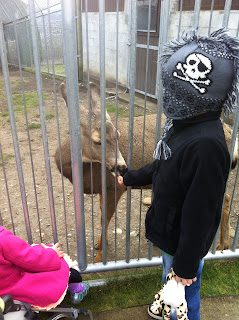 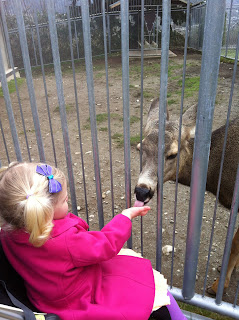 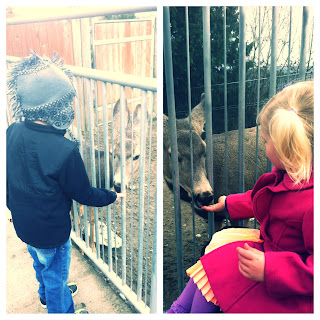 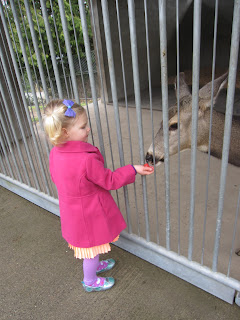 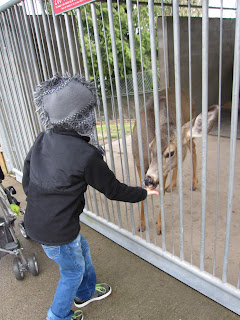 After seeing all of the animals and feeding the apples we'd bought to the ones we were allowed to feed, we headed out to the car. 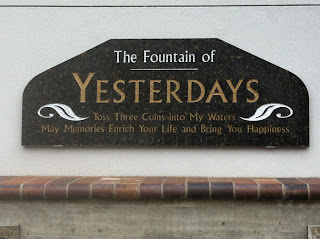 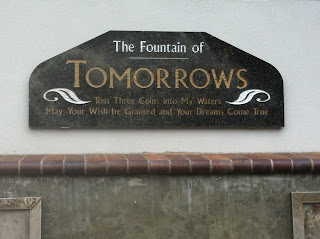 Since we were already in Isaquah I figured there was no reason not to just drive the twenty minutes and hit up the outlets in North Bend again.  They were having an amazing sale when we drove into Seattle and I wanted to see what they had left!  Plus Jen had mentioned to me wanting to look for some things for Madison so I decided to head that way and take another look.

To reward Preston and Madison being willing to let me look around Children's Place really quick and grab some things I decided we would go ahead and visit Snoqualmie Falls since it's right outside of North Bend!

Who doesn't love a waterfall?

These two definitely do! 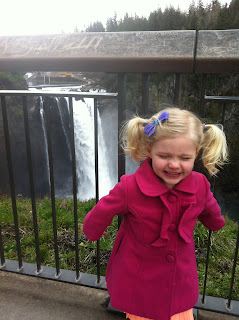 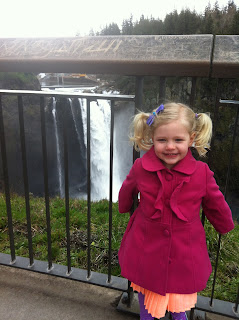 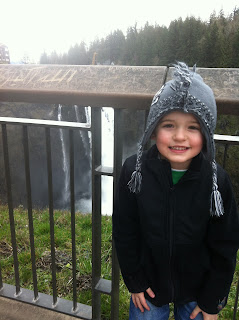 I mean come on look how freaking cute these two are! 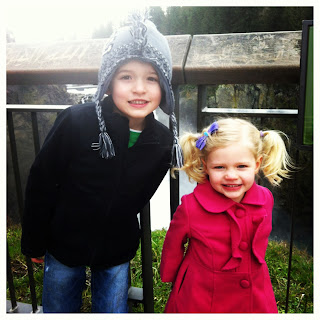 And they were both willing to stand there and smile for me at the same time.  Success!  Bribes may have been involved but that is neither here nor there!

After checking out the falls from the different viewpoints I let them run their sillies out for a few minutes. 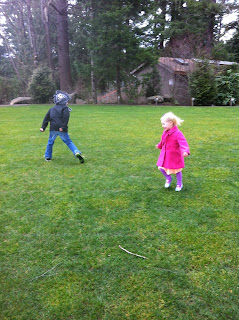 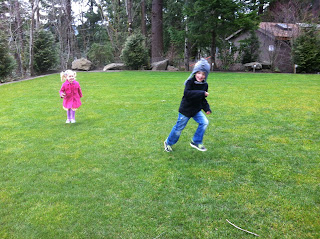 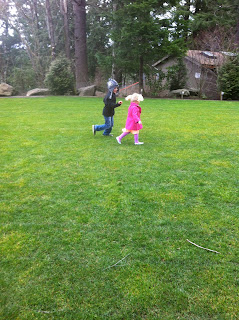 Up until Preston who was holding Madison's hand fell to the ground to roll around thus dragging her with him.  Not so great when the grass is wet.  And kind of muddy.

I got lost twice on the way back.  But it was totally worth it.  We had a great day exploring!