Guess who lost his first tooth?

We'd noticed it about two weeks before while brushing his teeth at bedtime. And only because when I brushed over it he told me it hurt so we stopped and looked at it and realized that he had his first loose tooth!

Then we all forgot about it.

I figured it was going to be a while before he lost it as it wasn't even wiggling yet.

We're sitting in the living room and talking during breakfast and cartoons when Preston starts asking about the Tooth Fairy and losing your tooth.

I answered with that when he lost his tooth the Tooth Fairy would come and leave him money for his tooth. He asked what she looked like and I told him that I think she probably looks like the one we saw in the movie Rise of the Guardians (awesome movie by the way!).

Then he goes back to eating and watching his cartoon.

Not even ten minutes later, he looks up at me and announced that his tooth came out! 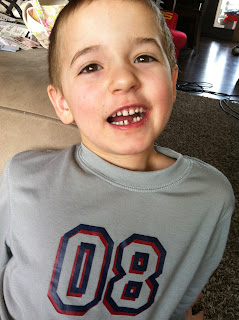 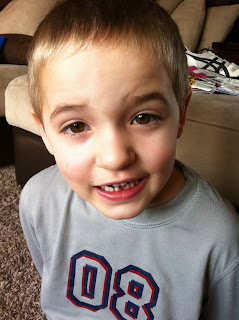 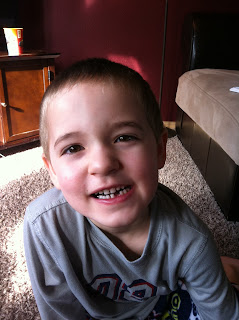 I was so confused. And shocked. And didn't understand.

I mean this tooth wasn't even really wiggling.

I honestly thought that he just thought it had fallen out. 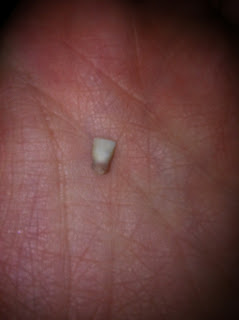 Preston was sitting there holding the first tooth he'd ever lost in the palm of his hand.  It was so tiny!

Apparently all this talk of the Tooth Fairy and her money coming for a visit got Preston to thinking that the tooth had to come out.  So he got to wiggling and playing with it and it finally just popped out!

Clearly he gets his patience from his Mommy!  Ha!

Of course we had to tell everyone.  Preston called Brad.  Then had me text a photo of his now empty space to Grandpa and Grandma so that they would know too.

He was so excited!

Brad was gone that night and we had dinner at my parents and ended up staying the night so the Tooth Fairy paid Preston a visit at Grandpa and Grandma's house.  I asked him if he thought that the Tooth Fairy would know how to find him and his tooth since he wasn't at home and he was certain that she would.

He was right, she did!

We put his tooth in an envelope and I had him write "Tooth Fairy" and his name on it. 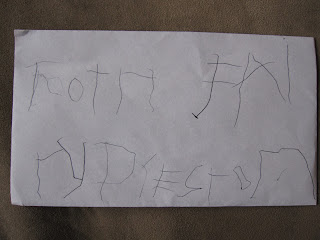 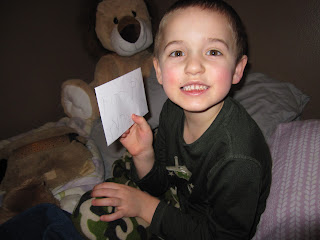 Then the next morning he woke up and the Tooth Fairy had switched his tooth out for five dollars!  In the form of four one dollar bills and a gold dollar coin! 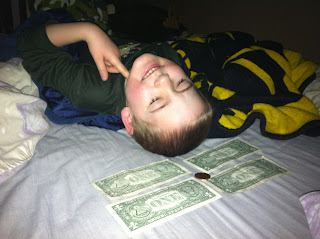 He was so excited!

He's doing to add his money to his bank account and put it towards his Ferrari!