Maternity Clothes: Not so much. My clothes are all fairly stretchy so I'm taking advantage. And I still have four pairs of jeans that fit me. My jeans are just low enough that they button under my belly. Well they don't button, but they do rubber band. I did wear a pair of my maternity jeans from Preston to dinner one night this week, but they are just too big. Which makes them not as comfortable as just wearing my regular jeans. I also wore a pair maternity tights that I had ordered. But again in the belly it wasn't really happening. I ended up rolling them down under my belly so they were more comfortable. Which was a little bit of a pain in the ass when I had to pee all the time and had to re roll them each time! But other than those two times this week, I'm still just wearing my regular stuff.

Weight Gain: I had my doctor's appointment on Friday so I went home and weighed myself so that I can start using my scale at home. It looks like I'm up somewhere between twelve and fifteen pounds!

Stretch Marks: No new ones. The ones Preston gave me are starting to be more obvious. Boo!

Belly Button: It's popping out. It's not all the way there but you can see the outline of it in my shirts.

Best Moment: We picked the green for her bedroom. I just couldn't commit to the green we had picked and told Brad I wasn't sure so we looked at Home Depot and found the perfect green for her room! Brad taped off some of the stripes and I put a little bit of the color on the walls to see what it looks like and I LOVE it! I can't wait for her room to be done, it's taking forever since life has been chaotic in our house!

Worst Moment: I brought Preston to my doctor's appointment this week.  I figured it'd be a quick weight check, heartbeat listen, and belly measurement normal appointment.  It was.  And then my doctor said he'd feel better about sending me out of town if he checked my cervix since I'd spotted the day before and told him I'd been having cramping, which he said is just round ligament,but the two combined and us leaving town he figured we'd just be on the safe side and make sure nothing is happening that isn't supposed to be.  Only problem, I brought Preston.  Go figure the ONLY appointment I bring him to and now I'm having my cervix checked.  Preston waited in the hall while my doctor checked me and it all worked out.  But I won't be bringing him to another appointment!  And everything is good with Olivia, my cervix is still all closed up.  Just normal pregnancy things happening!

Foods I Hate: I dislike a lot of foods but nothing specifically stands out. I just avoid the ones I don't like and it's like second nature so I don't really even think about it.

Foods I Love: Chocolate. And chocolate muffins. We also had stew this week. And it was so good. So good! That makes up for the chocolate right?

Cravings: Cantaloupe. And clam chowder. But the milk in it makes me feel sick. So that's not happening.

Sleep: Not too bad. Probably because I am worn out. Two kids is hard guys. I'm watching my niece this week while my SIL works and we've been busy. So at the end of the day I pretty much just pass out as soon as I get in bed!

Movement: She's getting pretty active. I even got her to move around this week. It's not consistent. But I did it. I'm sure she found it incredibly obnoxious. Especially if she was sleeping or something and I woke her up by pushing around the outside of my belly. But I figure it's only fair since in a few months she'll be waking me up whenever she feels like it! HA!

Symptoms: A growing belly. And an active baby!

Emotions: I seriously feel like we're running out of time. Since Preston was full term I keep assuming Olivia will be too and then realizing she could come anytime after thirty seven weeks and I could lose three weeks to prepare for her! There just seems to be this crazy list of things to do and finish doing and with being out of town right now none of it is happening! 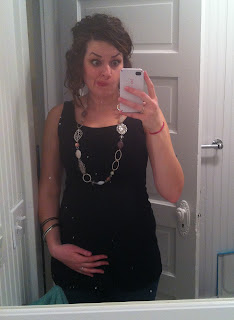 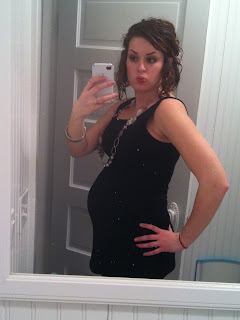 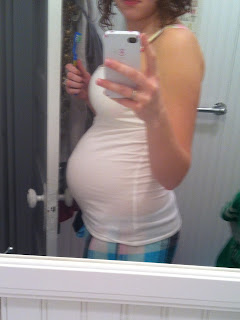 Next up twenty six weeks!