Maternity Clothes: Not yet. I only fit in a couple of pairs of jeans at this point though. I'm still good on shirts though, hurray for stretchy and long being in style!

Weight Gain: I'm still not sure. I need to see my Dr again and then weigh myself at home so I can figure it out. So soon!

Stretch Marks: No new ones. Just the ones from Preston slowly making more of an appearance again. They've come out of hiding. Boo!

Belly Button: Still mostly in. It's working it's way out.

Best Moment: Preston finally felt her move! He's been trying for a couple of weeks now but every time she started moving and I would tell him to come feel she would stop. On Saturday she finally cut big brother a break and moved around for him! Now she needs to move for Daddy! AND her bedroom is now pink! I love it. We still have to do the green and brown stripes. But there is pink in my house!!

Worst Moment: I've started getting used to her movement. And she was quiet one morning. And then I realized she had been quiet the night before when I went to bed. So I started freaking out. I did the same thing with Preston. I told myself she had until noon and then I would call in and ask to come in and see my Dr. She moved a lot, probably all the sugar I loaded up on. Apparently she just likes to keep me on my toes!

Foods I Hate: Nothing right now. Or at least not that I can think of.

Cravings: Cherry Pepsi/Coke still. OMG. It's ridiculous. And salad. I love salad when I'm pregnant. With Preston too. Oh and grapes. Red grapes are awesome right now. But only if they are crisp. Soft ones are not good. Even a little soft ones.

Sleep: Better. I finally realized that I need to start going to bed earlier to get more sleep. My hormones have me waking up earlier in the morning than I usually do. Once again the same thing happened with Preston and I finally realized that. I would wake up like an hour before I had to get up for work with him and finally I just stopped fighting it. Looks like we're at that point with Olivia too. So I go to bed earlier to make sure I get enough sleep to balance waking up earlier.

Movement: Preston felt her! And she moves around in the mornings the most. Like mid morning she throws a party. Also like Preston the bath gets her going. I don't know what it is but she moves around a lot when I take baths. The other night she was moving around and you could see her moving my baby bump. She also seems to prefer to hang out on my left side.

Symptoms: Other than a growing belly not a whole lot. Well that and the turning into a morning person.

Emotions: Seeing paint on her bedroom walls makes her arrival seem even closer and more real! I am excited! And a little terrified. We're going to have TWO kids! It's won't just be me and Preston anymore while Brad is at work. It's a little scary! 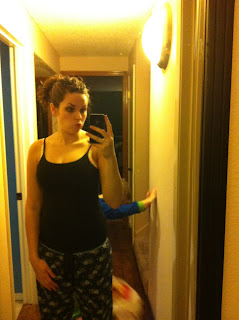 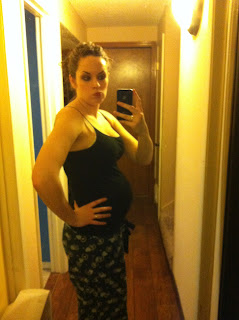 I'm thinking black was not a great color for these photos, it's harder to see.  Noted for next week!

Next up twenty-four weeks!

You look great! I haven't been to your blog in a long time and I'm so excited for you! How awesome, you're having a girl. Awwww....

For us... the surprise of a lifetime, we found out 37 weeks ago that we were pregnant, when we were told we could never get pregnant. We're having a little boy - on Monday - scheduled c section due to high blood pressure concerns, but he is full term at 37 weeks.

I'm terrified of being a mom, truth be told. My husband will make a great daddy.

Hi I'm Heather! Please email me when you get a chance, I have a question about your blog! LifesABanquet1(at)gmail.com