Preston's favorite color being green and all it was obvious that we were going to have to make his hair green.

So Friday morning, we got up and headed out of the house. I had to pick up some of that spray on wash out hair color. In green of course.

And had decided that since we were up and out early, we might as well make it a donut before pre-k morning!

Who would have thought that finding the hair color would be easier than finding the donut?

We finally found it at the third, yes THIRD, store we went to. We don't exactly have donut shops around here. Don't even get me started on how much that irritates me. And Preston wanted a sugar donut. They're his favorite. So a sugar donut he was getting.

We were late for pre-k that morning.

But Preston got his sugar donut. And showed up with green hair.

Cutest little green haired boy ever. If I do say so myself. 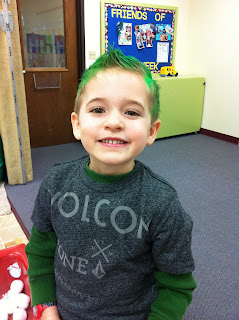 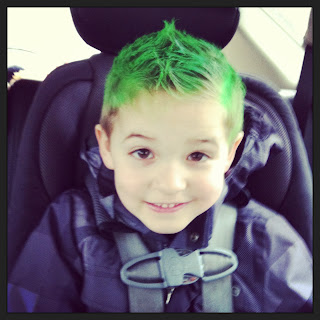 After pre-k, we headed to Hobby Lobby to look around.  And found some Pittsburgh Steelers duck tape.  Of course we had to take a picture and send it to my Dad. 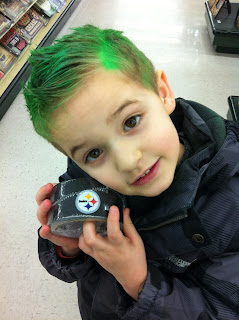 My Dad sent back asking me who the little leprechaun was!  Ha!