While looking up things to do while we're in Bellingham I came across a site talking about the Kendall Creek Fish Hatchery and that you could see bald eagles during the months of December to February.  They were also supposed to have ponds full of fish.

We got lost on the way there.  My damn google maps didn't add one of the turns in.  I'm really thinking that it's time to update my phone.  I've been slacking and I'm hoping that the update will fix these kinds of things.

Getting lost led to us stopping at a gas station to get candy and use the bathroom while I looked at the map.  Only problem the only bathroom they had was a porta-potty outside.  Even worse the porta-pottty was surrounded by water.  Like a moat.  And Preston really had to pee.  I had to hop over the water and then grab Preston's hand and pull him over with me.  It was disgusting.  And awful.  I am not cut out for small towns in the middle of nowhere.

Finally we found the fish hatchery.  Only I couldn't find any fish.  The tanks were supposed to be full.  And there really wasn't a whole lot to see.  That was disappointing.  We were told that we could go check the stream through a side gate but that we might not have a lot of luck there either.

I saw one.  Preston missed it.  He was too busy racing around the area.  And making me nervous that he was going to get to close to the water.  So we hung out by the creek for a little bit just because it was so beautiful and Preston loved being by the water.  And then I started to get a little nervous about how we were out in the mountains by ourselves and with Brad having talked to me about cougars and wildlife and all that jazz.  So we headed back to the other side of the gate.

Two of them.  Up in the trees. 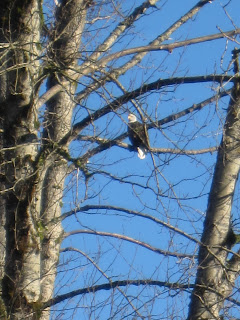 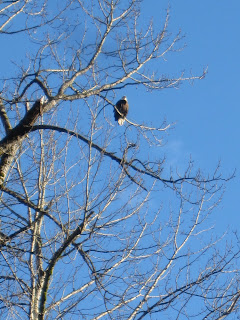 Preston wasn't nearly as excited as I was.

He enjoyed racing around and asking why we couldn't go into certain areas more. 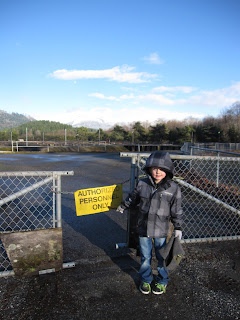 At the end of our little adventure, I think we both had fun!  We were also both cold.  But the fresh air felt good.  And we had candy waiting in the car for us for the drive back to Brad and the hotel.