The Game Of Life

It came to my attention that both my husband and SIL had never played the game of LIFE. Apparently they didn't play board games when they were younger. What is that?! I loved board games when I was younger!

Since we'd gotten the game for Christmas, because it is once of my favorites from childhood, I decided that we were just going to have to play it.

Jen was staying with us so I informed both her and Brad that after the kids fell asleep we were going to sit down and play a game.

And play a game we did. 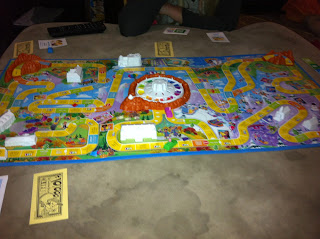 I'd learned from my game earlier that week with Preston that the game of LIFE has changed a little bit since I was younger. They've added things and tweaked things here and there, but it's still the same concept!

I am happy to say that we all had a blast!

Also that playing the game as an adult is much different than playing it as a child. As evidenced by the conversations we had while we were playing.

Seriously, we all just couldn't stop laughing.  And some most of it was so inappropriate.  Good thing it was an adult game after the kids had gone to bed!

To protect the guilty (ahem, mostly my husband and his sister) I'll just share the quotes and not who said them! Ha!

So I bring you "Quotes from the game of LIFE!"

"Is there a bankruptcy card?"

"I just can't live in a mobile home, I've already done that!"

"Put that bitch in the back."

"You're paying your bills early? That's a first!"

"She is an attorney. She'll find a way to fu*k you every time!"

"Sweet. This really is the story of my life."

"Give me five grand, I had another brat."

"I got a one. I got a home gym. I mean I know I'm fat because I just had four kids but really?"

"That's okay. We have bunk beds. This family is cozy!"

It was fun! And it was hilarious.