Finding Out About June Baby

We were trying to get pregnant with June Baby.

I even really wanted a baby in June.

But told myself not to get my hopes up to high because there are only at max five days you are fertile every month and that the percentages of getting pregnant are so ridiculously low. So the chance of us getting pregnant with the birth month I wanted when we were just starting to try wasn't all that high. But still I wanted a June Baby.

Preston was born on his original due date so I'm hoping June Baby takes note.

My wisdom teeth came out August 24. And then there was the dry socket. But finally I was done with all of it and off of the pain pills and we were ready to try. And just in time because I was going to be ovulating and like I said I wanted a baby in June.

Then began the waiting. I swear that two weeks of waiting to see if you are going to get your period or see two pink lines on a pregnancy test is the longest wait ever.

I started to wonder when the headaches began. But again told myself not to get my hopes up. But with Preston headaches were a part of my pregnancy and seemed to be one of my signs of being pregnant.

Then on the drive home from Madison's birthday party I was nauseous for the first half of the drive and did not want to eat. Both of which are things that are not a part of my every day life. I never feel nauseous and I always want to eat. But still I told myself not to get my hopes up.

After all it was only our first month of trying.

And it was still too early to test. I was a week out from the day my period was even supposed to start.

So I waited some more.

Then I got tired of waiting.

So I tested. Too early. And got a negative.

Then the next day I tested again. Just on a whim. Only it was towards the end of the day and I forgot to check the test in the time they tell you to wait and went in over an hour later and realized I'd forgotten to look. Oops.

Only this time it wasn't all the way negative but it also wasn't positive. And I wasn't sure what it was trying to tell me. I'd read online about tests not being accurate after the allotted time. Plus that whole thing about an evaporation line. So I told myself to stop thinking about it. And that I would test again in the morning when they recommend that you test anyways.

Then I headed out to dinner with a friend. Where I turned down a drink. You know just in case.

The next morning, on Thursday September 27, I woke up early. Like way early for me. Brad hadn't even left for work yet. He couldn't figure out why I was up already. I just couldn't sleep! I had to know.

And three minutes later I did!! 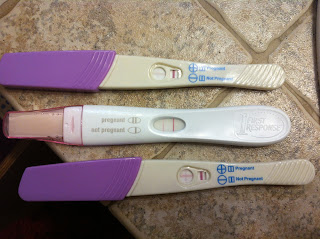 I was so excited and rushed out of the bathroom with the test to tell Brad who luckily still hadn't left for work!

And told him, while bouncing up and down.

Even more exciting when I realized that baby was due in June!

LOVE it! June babies are the best for second babies;-)