As is tradition we celebrated Christmas Eve at my Aunt and Uncle's house.

Every year my whole family gets together to celebrate the holiday. And to exchange gifts. It is one of my favorite traditions.

This year it was an even fuller house with five more kids!  Preston couldn't have been more excited for all of the people to play with.  Plus he just loves my cousin Trey.

Appetizers were set out and we all grazed and chatted and hung out.  While the kids raced around and enjoyed being among family. 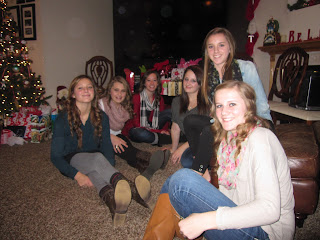 My cousin, Colten, brought his kitten Julio.  And he was like the baby that everyone wanted a turn with.  My Uncle even introduced him as his grandkitten.  Ha!  Preston was overjoyed to see a kitten at Christmas Eve, he's been begging for one for weeks now.  Julio definitely did not help my kitten fever which flares up every once in a while.  He was just so stinkin' cute!  I may or may not have been sneaking pieces of pepperoni to him.  And allowed him to finish my meatball. 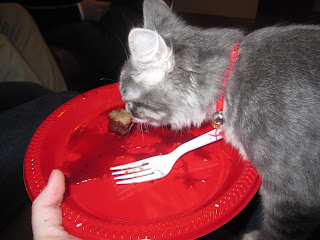 The kids do an exchange with each other.  Preston loved it.  He drew my cousin, Alyse.  And was drawn by my cousin Tristian.  Preston was even more excited when his present was the first one pulled out from under the gift exchange tree. 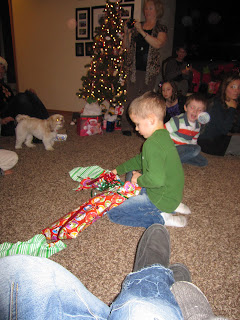 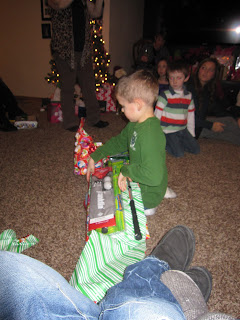 The excitement only increased when he saw that he'd gotten a golf set! 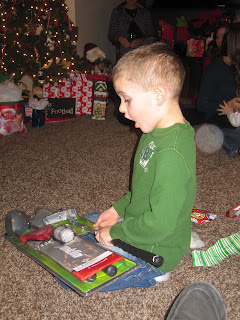 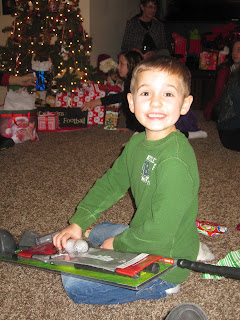 Poor little Julio kept sneaking away from everyone to hide in this basket under the table.  Preston found him out and kept climbing under the table to visit him! 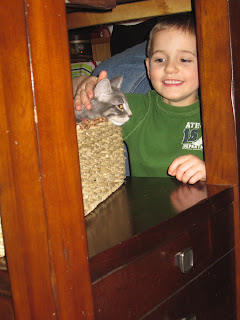 The adult gift exchange is always the highlight of the evening.  One of my favorite parts.  Everyone just gets to into it and heated and it makes it so much more fun!

When we got home Preston reminded us that he still hadn't opened his Christmas Eve gift from under our tree.  After he attempted to pick the biggest gift under the tree, it was decided that I would pick two presents and he could pick which one he wanted to open.

Before he opened any gifts he said that he wanted to open a power ranger.  But since there still weren't any gifts under the tree from us, I couldn't help him out with that.

He chose this one between his two choices. 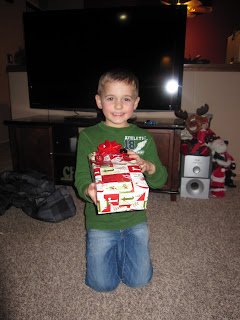 Funny enough once it was open, we realized that he had in fact opened a power ranger.  A green one.  Nicely done Gigi. 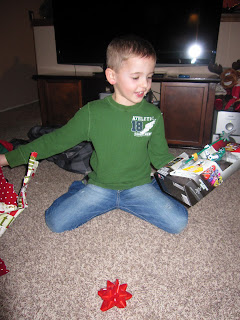 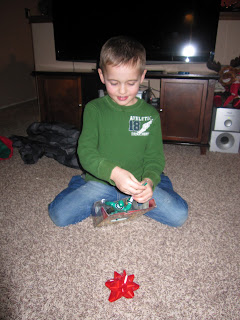 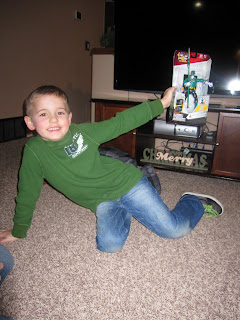 Preston changed into his Christmas jammies, which weren't very Christmas like.  I couldn't find anything in his size that was Christmasy.  So instead he got army pajamas.

We watched How the Grinch Stole Christmas and read The Night Before Christmas.  Then set out cookies for Santa. 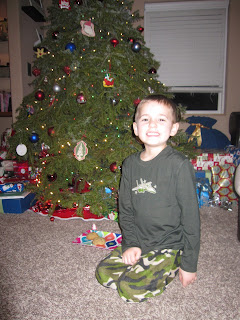 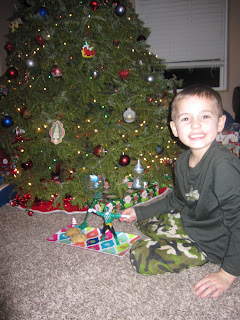 Preston insisted that his power ranger stay up and wait for Santa with the cookies. 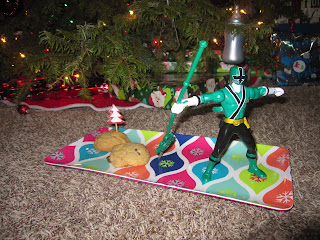 So after the power ranger was set up, Preston headed downstairs for bed and Brad and I got started on wrapping all of our presents and setting up for Christmas! Why we wait until after Preston has gone to bed on Christmas Even every year to do this is beyond me. Next year we'll have to plan this part better!