I knew when we found out we were pregnant with June Baby that I wanted to announce our pregnancy and baby's upcoming June arrival in a fun way. Something more than just telling everyone that we were pregnant and due in June.

So I started looking around online and on Pinterest.

I found an idea that I liked and modified it a little bit and we were ready to start announcing.

My parents got the first announcement when we were seven weeks pregnant with our very first ultrasound photo.

We'd printed these off for them and stuck them in envelopes and handed them to them saying that we had something for them. 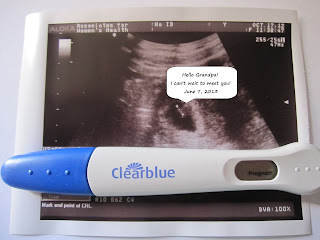 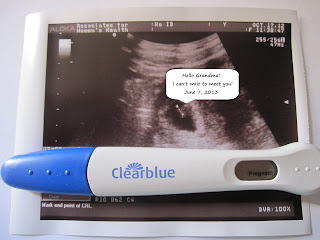 They were ecstatic!  My Mom had suspected that I was pregnant and confronted me about it a few days before but I distracted her from her question without actually answering her, so she'd assumed that she must have been wrong.

After theirs I decided that I didn't like the pregnancy test being in there as much so I didn't add it to the other announcements. I was pretty sure that just seeing the ultrasound photo would be enough for everyone to understand!

Everyone was pretty excited and a little bit surprised when I would send or hand them their personalized photo! 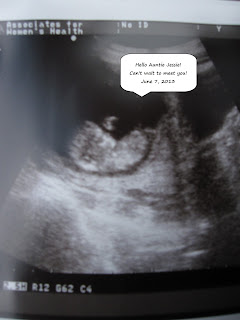 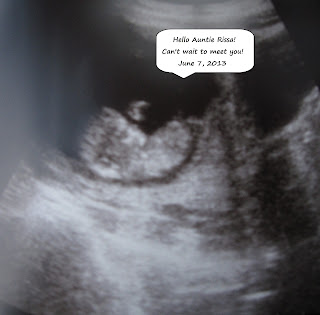 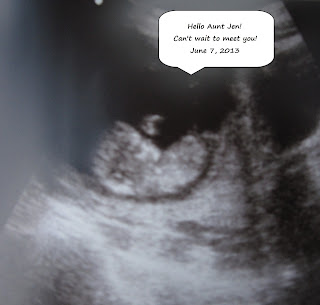 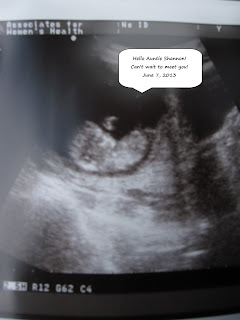 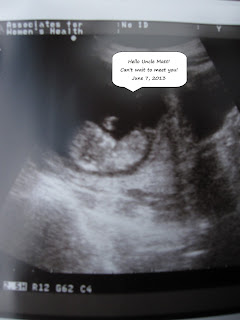 My littlest sister Marrissa had one of my favorite reactions.  I was sitting in my parents living room with her and texted her the photo I'd just made for her with our latest ultrasound.  I'd captioned it with, "Can you keep a secret?"  Then I waited for her to check her phone.  Being that she's a fourteen year old girl it took all of five seconds.  She opened it, read it, and then looked up at me with her eyes wide and asked, "Really?"  All done very quietly since I'd written that it was a secret!  It was fun to watch and see her surprise and excitmement!

I wanted to be able to do a big announcement and have everyone hear the news of June Baby from us instead of it working it's way through the grapevine.

After we found out we were pregnant it wasn't long before I realized that I would be hitting twelve weeks the day after Thanksgiving. Which seemed perfect. What better day to announce that our family was growing than a day full of thankfulness? Add in that my whole family would all be in one place and we'd decided it was the perfect time to share our big news!  It seemed even more perfect, when my doctor scheduled me for an ultrasound on Monday the week of Thanksgiving.  Meaning that I would be able to announce June Baby with a new photo!  And as it turned out one that really looked like there was an actual baby in there!

I wanted Preston to be a part of sharing the news but didn't want to use the typical Big Brother shirt. So when I stumbled across this shirt on Pinterest, I knew I had to order one for him!  I loved that it could be personalized with baby's due date but also shared that Preston wasn't just going to be a big brother but that he was also losing his only child status! 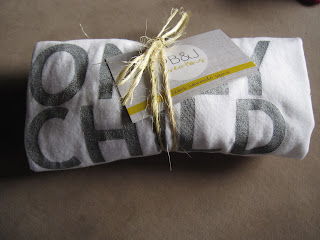 On Thanksgiving, we had the mad scramble to get ready and out of the house with everything we were supposed to bring.  And to have Preston dressed in his new shirt.  With a shirt over it so that the news wouldn't be shared until everyone had arrived.

Preston was still in the dark at this point so we told him on our way to Thanksgiving (I'll share in another post!).

I had made another announcement that wasn't quite as personalized.  Instead of saying the specific family members name this one simply said family.  I'd printed off a bunch of them an put them into envelopes to be passed around after everyone had arrived. 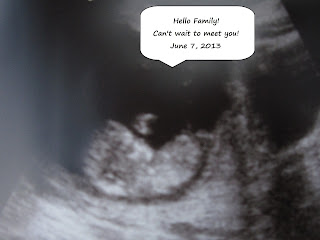 When everyone had arrived we brought Preston into my sister's room and took his top shirt off so that you could see and read his new Only Child Expiring shirt.  And handed him a pile of envelopes.  He was excited to pass them out and share the news of June Baby.

While he handed them out, Brad and I stood off the side and watched and waited.

He started in the kitchen which was where most of the women in my family were currently at.

My Aunt Kristin opened hers first and saw the photo and realized what Preston was handing out.  Then realized that everyone else was just holding on to their envelopes thinking that Preston was just playing and handing empty envelopes out to everyone.  Which is when she looked around the room and said to my Aunt Sheli, "You need to open your envelope NOW!"

And thus began the congratulations!

I love how excited my whole family was!   Everyone was thrilled!

My Uncle was even so adorable about it that after all of the Thanksgiving festivities were over and everyone was heading home he was trying to find his photo to take it home and my Aunt and cousin both told him not to stress it because they had theirs.  And he informed them that he wanted to keep his baby announcement thank you very much!

Since my Mom's side of the family lives in California and were refusing to answer their phones, I ended up texting all of them our big news!

I had made another announcement using our ultrasound, this one saying friends.  And then forced Preston to stop playing with his cousins long enough to smile and let me take a photo of him in new shirt.  Then made the two photos into a collage on my phone.

And uploaded the new double photo to Facebook with the caption, "Feeling very thankful that God has blessed our family with this little one...AND this little one!  :)" 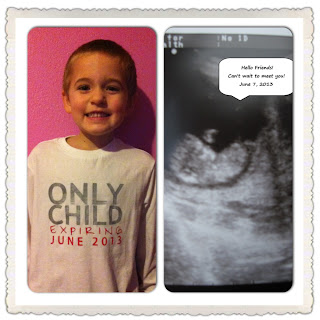 Everyone seemed surprised, which was what I was hoping to accomplish! Even friends who had started to suspect that I might have been pregnant (I'd turned into a little bit of a hermit between trying to keep June Baby a secret and dealing with all of the nausea) hadn't had it confirmed until our announcement.

Now to just wait until June for baby to arrive!

LOVE it and I can't wait either!!!