We Go To The Fair

The fair came to town so I bought advance tickets and wristbands and we picked a night and headed down there.

On our way I hopped on Facebook and saw that a friend of ours was going to be down there so we decided to meet up!  Facebook for the win!

Preston was so excited to ride the roller coaster in the little kid section!  With the height limit I couldn't ride with him so he was on his own.  And totally fine!  My brave boy! 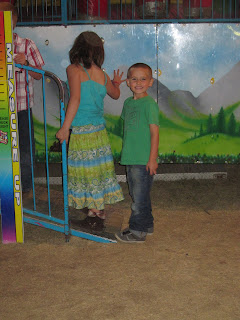 We headed over to the bigger side and found Cohen and the caterpillar rollercoaster!  Where the boys decided to go for a ride together.

This is more of a big boy ride!  It sits in the middle of the little kid rides and big kid rides.  It was going to be Preston's first big boy ride without Mommy!  I think I was more freaked out than Preston was.

Look how adorable these two boys were.  Holding hands in line. 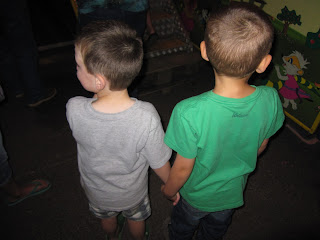 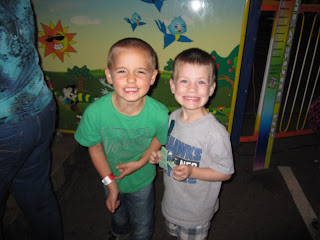 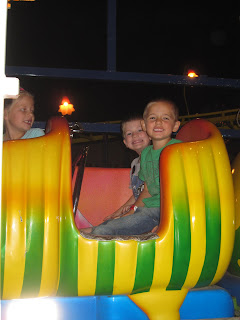 They showed no fear.  Climbed off with the same smiles they climbed on with.

From there we headed back over to the kids area to find some more rides.

And ended up on the little kid version of the yo-yo! 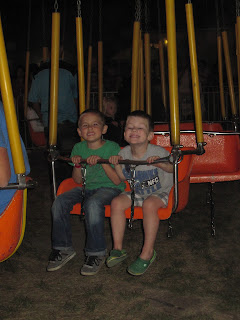 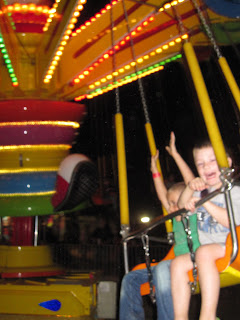 And then the spinning bears! 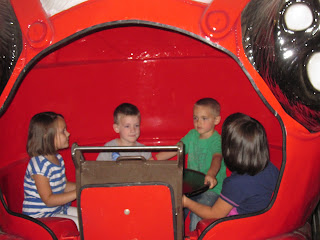 Can you tell Preston was more than just a little bit excited to be hanging out with his buddy Cohen at the fair?  He was bouncing all over the place. 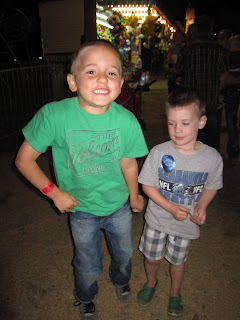 The boys finished on the roller coaster. 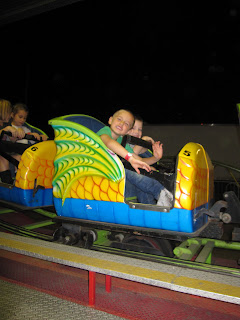 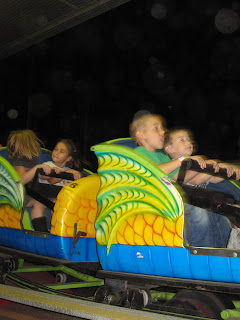 Before we all parted ways.  I'm so grateful to Facebook for making it so that we all realized we would be down at the fair at the same time and making it possible for us to meet up!  Social media at it's finest!  Preston had a blast riding the rides with a friend.  And even though it was a little nerve racking for me it was fun to watch!  Plus it meant I got Mommy time on the sidelines while watching and chatting with Kelly.

Brad headed out too.  He was off to pick up with Jen and Mads from the airport and then would head back to the fair to grab the rest of us.  So it was just me and Preston left to wander, since Marrissa and Kasey had long since split off from us.

Every year Preston does this trampoline thing at the fair.  He loves it.  And this year he even did a flip while he was up in the air!  I wish I would have caught in on my camera but it was dark and nothing was coming out the way I wanted it too.  Not that it matters, he had a blast jumping with or without the photos to prove it! 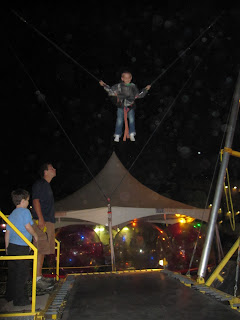 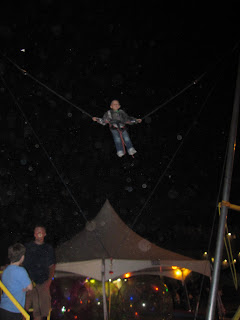 We wandered into the big kid ride section from there.  My little daredevil had his eyes on the giant roller coaster from the moment we pulled into the parking lot.  And I'd promised him that as long as he was tall enough we would ride.

He was!  So we hopped in line! 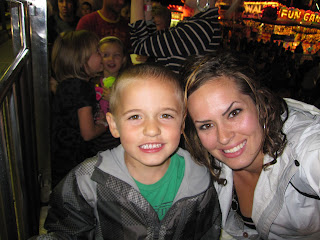 And then hopped on!  He was just a little bit excited about riding the BIG roller coaster! 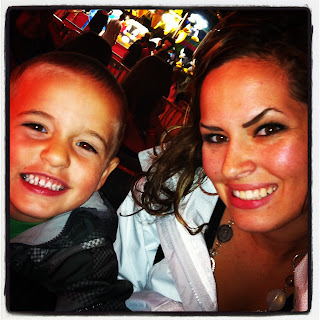 I love taking pictures of him on roller coasters and then getting to see his face in them when we get off! 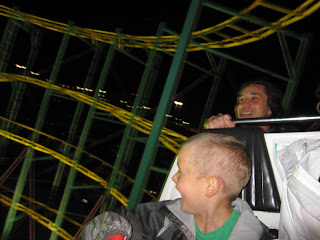 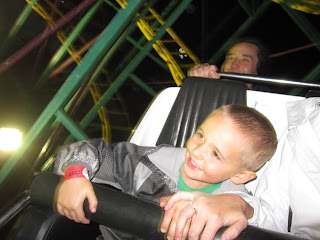 We met up with Riss and Kasey after that and all rode another ride together.  It's loud and goes forward and backward.  And me and Preston rode it twice. 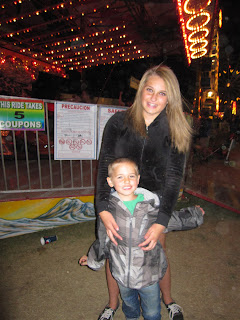 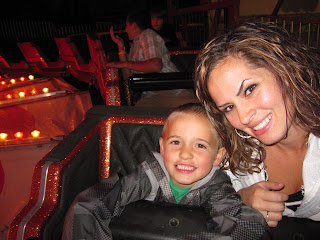 Seriously this little man of mine is such an adrenaline junkie!  As we walked around the ride area he asked to ride all of the scariest rides and was so bummed that he wasn't tall enough for so many of them.  Poor guy.  Lucky Mama, who wasn't ready for him to ride some of them just yet!

He was tall enough, for the big yo-yo! 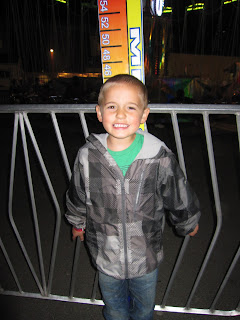 So we climbed on.  Me thinking it wasn't going to be all that bad, it's just a giant swing right? 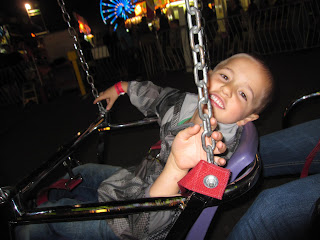 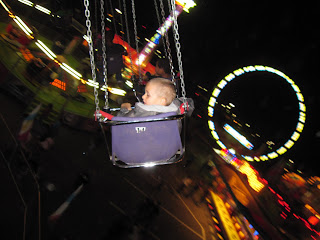 It was!  I did not love it.  And about half way through Preston called back to me that he was scared.  By the end of it he loved it again.  But I'm glad we have another year before the fair and the yo-yo come back to visit again!

We ended up back on the caterpillar roller coaster again.  This time I rode with Preston.  And he showed off by not even holding on for part of it! 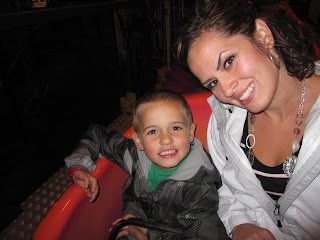 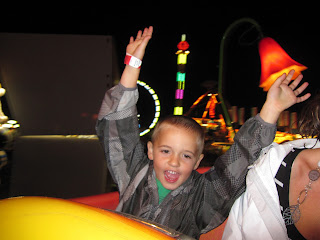 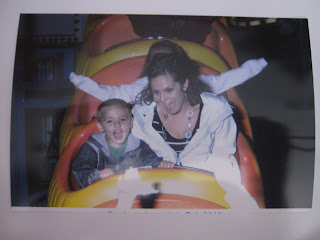 Our last ride of the night, wasn't even a ride.  Preston loves the fun houses.  And even though he'd already done a couple of them he decided that it should be the last thing we did before heading out.  And insisted that I come with him. 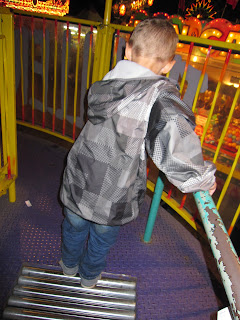 We grabbed a quick shot of the four of us as we headed out! 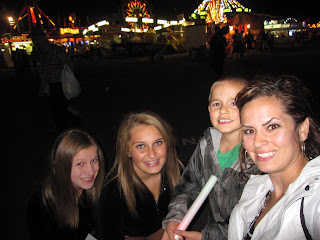 We had a fabulous night at the fair and can't wait to go back next year!