Preston had his second soccer game this weekend.

We went back and forth on whether or not to let him play. He'd started showing signs of a cold Friday night and was up a couple of times. But Saturday morning when he woke up he seemed good to go and since the game was in the afternoon we figured we'd let him play as long as he wanted too. 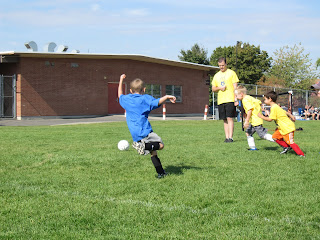 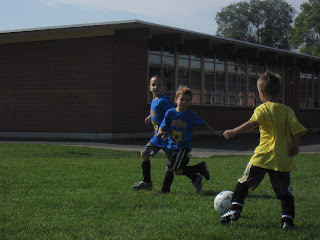 Preston even scored not just one but TWO goals at the game. 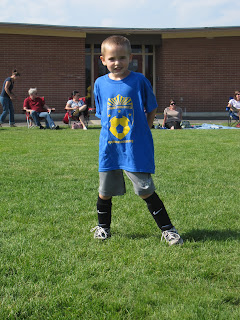 All on his own. I couldn't be more proud of him! And loved seeing his little face light up and how proud he was of himself!

Get ready I'm about to start bitching.

We are on the wrong team. I'm not even kidding. Preston wants to play soccer. He wants to learn about soccer and he wants to have full practices and full games. Our team, not so much. While this game was much better than our first. And I'm told WAY better than our second (we missed it because we were in Seattle). I've been told that in our second even though Preston was the only kid missing we had to borrow two players from the other team when our team just didn't want to play anymore.

What is that?! I mean really what is it?

Let me explain. We have a kid on our team who won't play. Just won't. He sits on the sideline with his Mom who applauds him just for coming to the game. Okay. We have a kid who tries to play but his version is just throwing his body down either right next to the ball or on top of the ball and then uses his hands to stop or grab the ball. Then we have a little boy who is not so interested in the game and has actually sat down ON THE FIELD to pick at the grass. That leaves three little boys. We have one little boy who is okay. When he's paying attention. He doesn't always pay attention. That leaves Preston and another little boy. They are the only two who seem to actually grasp the concept of the game.

This is incredibly frustrating to me. Especially when we aren't playing other teams like this. We are playing teams who know how to play and want to play and actually do just, they play soccer!

We lost our game this weekend.  13-2.  The two points that Preston made! Two points that I mentioned before he made all by himself. As in one of the times he kicked the ball all the way down the field by himself and scored. No help from his teammates. Who I'm not even sure even knew where the ball was or that we scored.

We are just on the wrong team. We're taking this seriously. We're competitive. We'd like to actually be able to play a full game without kids spinning in circles or picking grass in the field. We want to win. Whether there is an "official" score or not.

Honestly at this point I'm not sure whether we're supposed to encourage Preston to use his teammates or to show him how to get the ball to the net on his own. The other kids just aren't paying attention and don't really seem all that into it.

Not that it's just their fault. One of the parents brought one of our players twenty minutes late this weekend. TWENTY minutes! To a game. And then didn't even try to explain why. It wasn't even a morning game people. Then her and another Mom spent the whole time acting like it was a lunch date. I mean they didn't even know if their kid was on the field or not. One of them even had her back to the field while they chatted.

Can you tell I am frustrated?

We just were really looking forward to Preston playing soccer. Preston was so excited. I just don't want this to ruin the experience for him.

Already after practice he is disappointed that either they don't practice for more than a half hour or that only him and another little boys showed up.

Next time we are definitely going with a different league!

Phew. Glad I got that off my chest.

By the way did I mention, MY SON SCORED TWO GOALS!?!!! Cause he did. And he did it all by himself. With a cold.