Jen and Madison flew into town Friday night. Brad's cousin's daughter Lily was turning one this weekend and having a party and they came in for the celebration.

While trying to come up with something to do to spend some time together, we decided to head out to my parents spot on the river. Jen and Madison were up for some hiking and exploring. And we figured it would be fun to stay the night up there and just hang out.

After Preston's first soccer game that is.  It was an awesome coincidence that Preston's first game happened to fall on the same weekend that Aunt Jen was in town so she could watch him play!  And score his first goal!

After the game we headed back to the house to pack some things for the kids to wear and play in and stop by the store before we were on our way.

Oh and stop for a late lunch.

We aren't so good at this whole getting going thing.

We apparently got there just in time.  My parents were already there and their totally awesome neighbors up there had offered them a ride on their jet skis.  WHAT!  We wanted to ride too!  And since they are awesome they let all of us go out too! 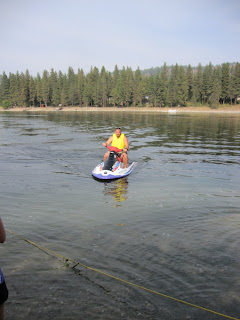 Then Brad headed out on his own.  When he got back we suggested that he take Preston out too since he had his life jacket on.  Preston wasn't so sure about going.  But we convinced him.  I guess he was a little nervous out there with Brad and did NOT want to go fast. 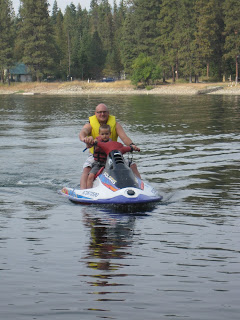 He was apparently much more content to just play in the sand on the beach. 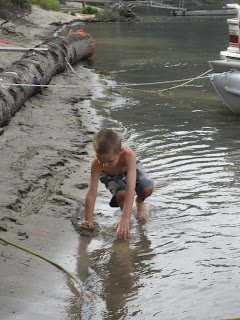 Brad took Madison out for a spin next.  And she loved it.  Huge grin on her face.  All the way up until Uncle Brad brought her in and we yelled for him to cut it so he didn't catch it in the weeds.  And then he spun it back around and all of it freaked Mads out.  Dang Uncle Brad ruining a perfectly good jet ski ride. 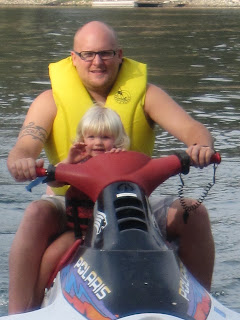 Then my Mom took a turn.  Which was nerve racking just to watch.  She is a nervous driver anyways and on a jet ski, she is terrifying. 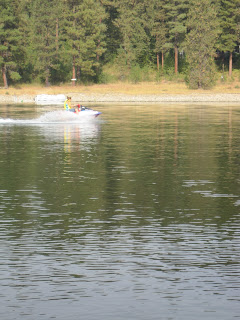 Bennie didn't like her out there either!  He was such a nervous wreck about it and whined the whole time she was out there. 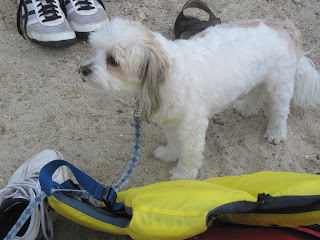 When my Mom came back she insisted I go out with her.  I'm pretty sure it was just to prove that she wouldn't kill us since I had said no way no how would I ride with her.  And now I can say no way no how will I ever do it again.  She rode way too close to some kayakers more than once!  And was afraid to go even remotely fast.  In fact I was reaching around and pushing the lever down.

When she brought us back I took me and Jen out.  Oh my word.  We need one of those.  It is just so much fun.  And so thrilling!

After saying thank you to George and Bonnie for the jet ski rides we headed back up to get ready for some hiking. 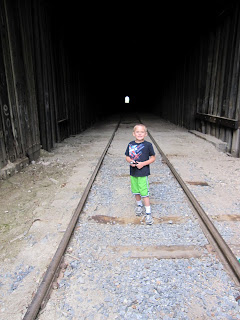 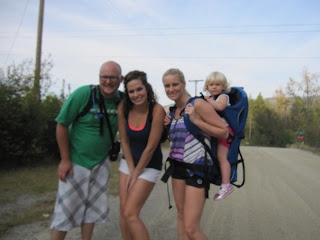 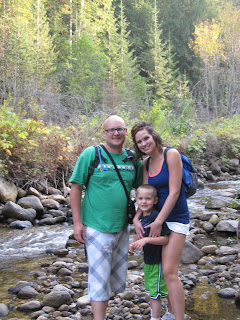 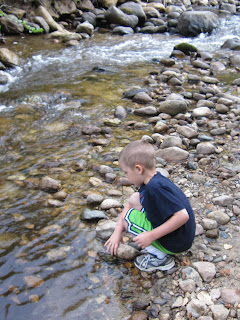 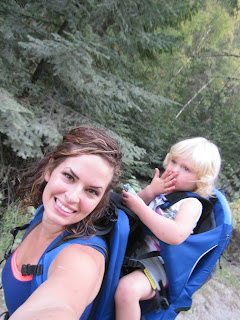 We didn't last long.  I was nervous after our almost encounter with a bear cub up here and Preston would not stay close enough for me to be comfortable.  And oh my word the backpack the we brought up to hike with Mads was heavy and uncomfortable!  We had to pass her amongst the three adults!  Before we finally just gave up and called it a day and headed back.

We did some dinner and got ready to settle in for the night.

Mads didn't last too long.  She was exhausted after skipping her nap.

After dark Preston got some time in with Grandpa and Grandma.

With Grandpa on the iPad. 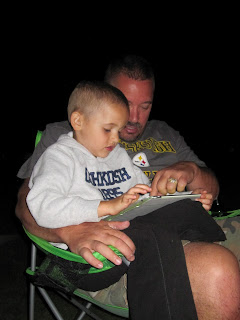 And with Grandma at bedtime.  She spent some time telling him scary stories.  Because Preston loves scary stories!  And stories about when the grown ups in his life were little! 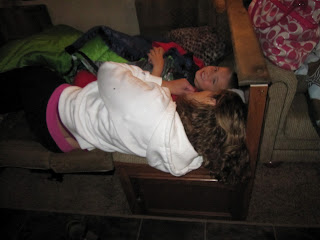 Bennie felt a little left out.  He did NOT like it when my Mom was inside and he wasn't.  He is such a Mama's boy! 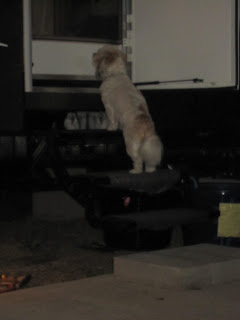 I wish I could say the night ended well. But alas it did not. Me, Jen, and Mads did not sleep good at all! I was just tossing and turning and I have no idea why. It might have been too hot. Who knows. And Mads woke up around the time we all headed in to go to bed and decided she was done sleeping. And then didn't sleep. Until around three or so in the morning. Very rough. Even worse for Mads, she fell off the bed. Not just once but twice. And both times it did not sound like easy hits. Poor girl!

We were all exhausted on Sunday. And ready for naps! It was a quiet car ride home. Mads even fell asleep for an early nap and then continued to sleep once we got home. She slept for four hours. Jealous!

We were a little bit late to Lily's party but we made it!

Now I just need a couple of days to recover from the weekend!