I haven't done one of these in a while!

My littlest sister turned fourteen yesterday. Crazy talk. I remember the night she was born! And racing down the hospital hallway to meet her just minutes after she made her entrance into the world.

We went to dinner for her birthday and the iPad kept both Preston and my Dad entertained. 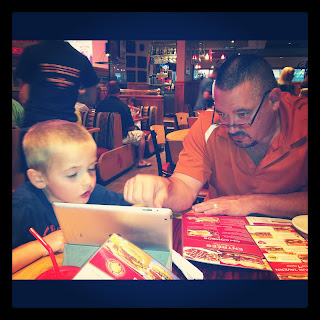 Preston got some new shoes the other day.  I passed them as I was walking through the store and the green caught my eye.

Preston has a thing for green.

So now he has a new pair of green Vans. 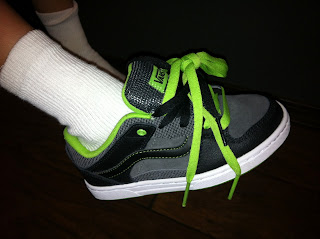 He was soooooo excited when I brought them home for him.

This year has been a year of purging for Brad.

He went through his "man cave" and got rid of at least half of the crap in it.

Then he sold the Audi.

And two weeks ago he sold his Buell.

He hadn't ridden it in a couple of years.  So it had just been sitting.  He'd decided that it was just being wasted sitting in our garage not being ridden.

A Craigslist post went up and a few weeks later it sold.

He was a little bit sad about it but said that there wasn't much point in keeping it when he wasn't riding it.

Plus he still has the dirty bike.

I was on the phone with my SIL for four hours tonight.

I don't even know how that happened?!

I guess we had a lot to say!

We hit up a pool the other day.

I wanted a real pool vs the above ground one we have in our backyard.

It was in a part of town that we don't' usually visit (it's a little rundown) and when we walked up the sign said they'd had some thefts at the pool lately and to leave valuables in the car.  So I did just that.

Don't have to tell me twice!

The pool itself was okay.  But holy crap some of the kids there were NOT being watched at all.  Just running wild.  And I heard more than a few naughty words.  On top of me, Preston, and Marrissa constantly being trampled by kids who just didn't even care that they were tramping us.

Clearly some parents don't take the dangers of pools as seriously as they should.

Marrissa came home with us after I only lasted an hour at the other pool.

So we ended up swimming at home.

Well they swam.  I watched.  It was later in the day by this point and I was way too cold to get in the pool.

They swam and Marrissa taught Preston some of the cheerleading moves she's learned over the last year from her squad. 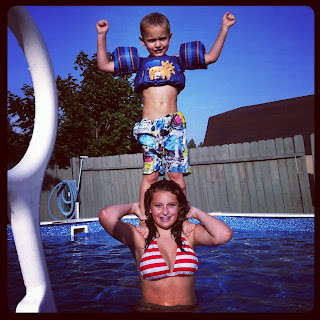 Those two are pretty cute!

I finally started and got caught up on Jersey Shore.  I have no idea what took me so long.  Now I'm addicted and can't wait for the new season to start!

I ate ice cream out of the carton a couple nights ago.

A cut down carton. 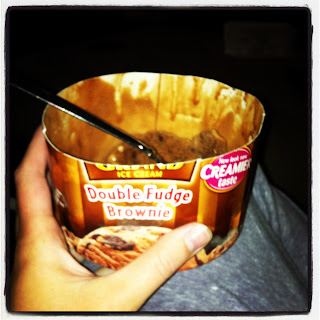 No need for a bowl over here.

Wish I could take credit for the idea but it was all Brad.

I knew there was a reason I kept him around!

I'm finally getting caught up on the blog. But still have a lot to do!

They sent me an invite to their online outlet sale and while normally I just ignore them this time I clicked over to take a look.

I was only going to get one, but Brad convinced me to get two.  And when I protested he told me fine...but if I was getting one he was getting one too and that he'd let me pick his out and borrow it.  Ha!

I couldn't exactly tell him no, that wouldn't have been fair!

So I had to order two.

I can't wait for them to arrive!!

Is it lame that I'm watching Crazy Stupid Love for like the millionth time?

I just love this movie so much!

It's supposed to be 99 degrees here on Saturday!  We are going to the lake!  I'm just trying to figure out which lake.  But we will be at the lake!