The other day when we stopped at the mailbox, Preston asked if he could run home.

At first I went to say no.

But then I thought about it and figured there was no reason he couldn't.

We're at the end of a cul-de-sac so there isn't a whole lot of traffic and it really wasn't that far. Just five or six houses.

He was so dang excited. 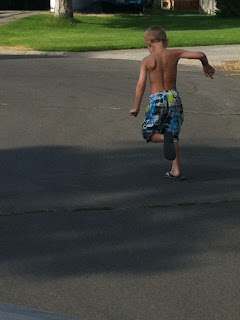 I just followed behind him in the car.

As he took off he informed me that we were racing. Ha!

He's done it a few times since then and every single time he is just in such a great mood by the time I pull into the garage a little bit behind him.

Such a small thing and it seriously makes Preston's day.