Preston And His Toys

Preston got A LOT of stuff for his birthday. And I do mean A LOT!

We have awesome friends and family that me, Brad, and Preston are incredibly grateful for.

But the result of all of those new toys in a playroom that is already oversized and overflowing was complete chaos.

Here's a little bit of a sneak peek, I can't believe I'm even sharing how trashed this room is on the blog! 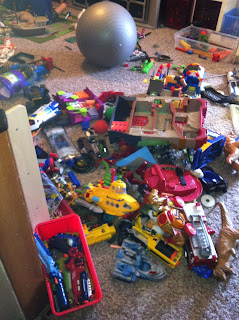 That's not even all of it, it's just a small part of the disaster.

The part closest to the door. Because for some reason even though Preston has a whole playroom that is probably the same size as our living room he prefers to bring his toys out into the living room to play most of the time. And then when I get tired of seeing and tripping over them I ask him to bring them back into the playroom.

Typically that means putting them back where they belong but with all of the new stuff nothing has a place right now.

And going through it all has just seemed so overwhelming to me. So I've been avoiding it! HA!

We're finally getting started on taking on the task. This weekend. I am determined to have that room functioning again. To have everything have a place. And for it to be easy to find things again.

Which means we also have to get rid of things. Toys that aren't played with as much anymore to make room for new toys!

Preston struggles with this part. He hates getting rid of his toys.

Usually I do it without him so that he can't try to hoard it all.

I'll pack up what I know he doesn't play with and put the things that are questionable into a "watch" category and I pay extra attention to whether or not they get played with and if they don't in the next couple of weeks they get packed up too.

Now that Preston is getting older though, I've decided he needs to be included in going through his toys.

So I asked him to go into his playroom and find five toys that he doesn't play with anymore that we can pack away.

He went in and found five. Five that didn't belong to him. He brought me the toys that Mason has left over here and said we could give them back to him.

Yeah, that's not what I meant when I asked him to find five toys in the playroom that we could pack away.

So I sent him back in and told him he had to find five of his toys.

This time he brought me five hot wheels cars.

I'm not even kidding. All of those toys and he finds me five little cars out of the probably hundreds that he has.

So we had to lay down some ground rules. He couldn't pick five hot wheels cars, and if that was something that he was willing to part with than he had to get rid of all of them and they would count as one of the five things. The same goes for Lego's, the little matchbox airplanes, and the army men.

And then when he still was having a hard time figuring out what to pack up (he kept bringing me things we know he plays with), Brad went in to help him out.

Brad didn't last very long in there before he gave up. This conversation might help explain why...

Me: "Preston you never play with that!"

Preston: "Yes, I do! You just never see my play with it."

I should also mention that it was in the bottom of one of the drawers in one of his Ikea toy storage containers.  And it's not just a deep drawer that he just couldn't see it so he forgot it even existed.

I'm planning on going in there with Preston, later today or tomorrow to tackle the room and the crazy amount of toys.

Something tells me that the pain medicine they have me on for getting my wisdom teeth removed will help!