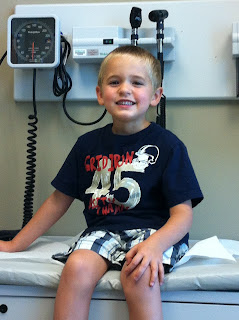 I get so excited for these and hearing his measurement and percentages.

Plus he loves finding out how tall he is and climbing on that scale and watching the numbers go up.

He was three feet and nine point two inches tall. Putting him in the eighty-seventh percentile. He's always been tall! He weighed in at forty-five point four pounds! That puts him in the seventy-sixth percentile for weight. Not too shabby!

Preston also got to take his first eye exam! And pass with flying colors. Twenty twenty vision over here! Thank goodness he gets all of his good traits from his mama! Ha!

There were also shots involved. He didn't love that part. We call them his superhero shots. This time he got his X-Men shot and the Super Man one. It helps him accept that he has to get them and it makes explaining how they work easier. He knows that he gets the shots so that he has superheros in his blood that will fight off the bad guys! A simple way of explaining what vaccinations do to a five year old.

Then a couple of questions later and we were on our way!