Tonight we took Preston to his first baseball game.

And it was sooooo much fun!

I had it on my list of things to do this summer and was starting to wonder if it was actually going to happen. I sent my Dad a text and asked him if the company had any tickets left (we buy season tickets every year). At first he had no idea. Then he text me back and my Uncle had just dropped two nights of tickets off on his desk so I could have my pick of nights. Score!

We headed down and after a little bit of stressing about what my picky eater was going to eat at the stadium (thank goodness for chicken bites that the pizza stand was selling) we found our box and settled in.

Preston had never been to a baseball game before. But he was pretty excited. He's been loving all things baseball since t-ball. 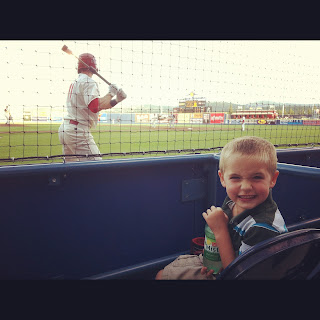 Let me just say our seats were AWESOME!  Absolutely fabulous.

I've used our tickets before but it was years ago and I forgot how great the seats were.  We were just to the right of home plate.  Almost in the middle of home plate and first base.  Right up front.  Box seats.

Perfect for keeping Preston's attention!  He could see everything up close. 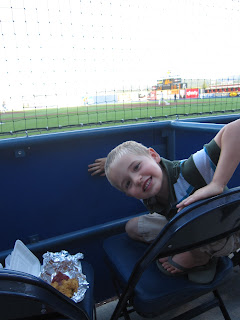 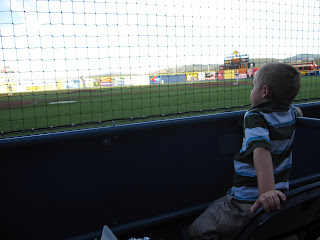 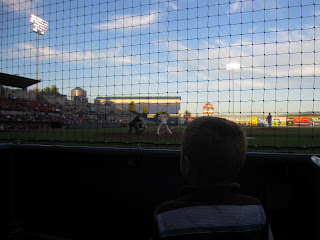 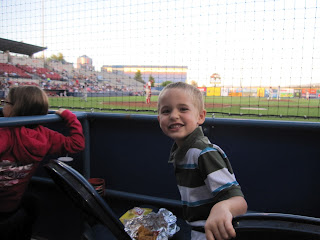 Preston loved this guy because his name was also Preston.  He got such a kick out of that.  When I first told him, he was shocked.  He had a hard time with the idea that there are other "Preston's" out there!  Ha! 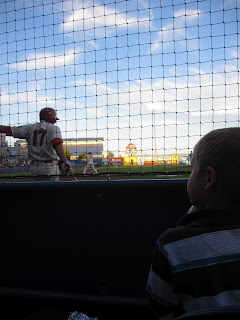 Sneaking a photo with my sweet little boy! 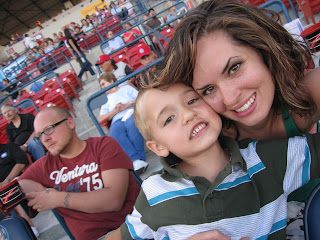 I promised Preston that if he ate his chicken bites (it's a new food so he wasn't so sure about them) that when he was done we would head over to check out the Kid Zone.  A little motivation goes a long way with Preston.

So as soon as he was done he was ready and it was time to head over there.

It was an awesome area.  They had a bouncy house, a batting cage, and a big blow up slide.  A great idea to help younger kids make it through the game.  They get a chance to get up and get all their wiggles out.  Plus it was free.  Say what?!

Preston insisted that he had to do all three.  Since he's the one who ate all of his chicken bites that's just what we did.  He did the slide, the batting cage (where he hit a ball!  That's my boy!), and the bouncy house.  He even rolled with the older boys in the bounce house. 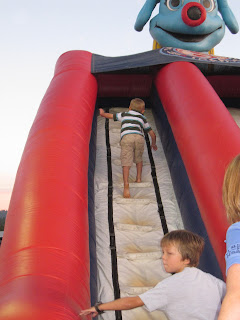 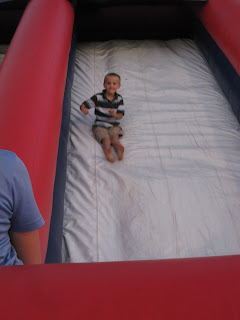 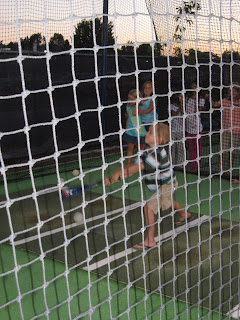 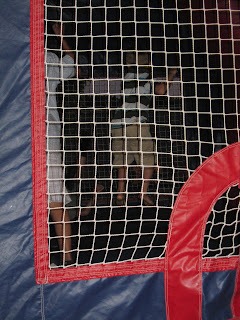 Preston got some energy out and was ready to go back to our seats and watch the game afterwards!

We didn't make it all the way to the end of the game.  Just until the start of the eighth inning.  By then it was already after 8:30 and we still had to drive home.  So it was time to pack up our area and go.

Preston had a blast.  I know that we will be going back for sure next year for more games. 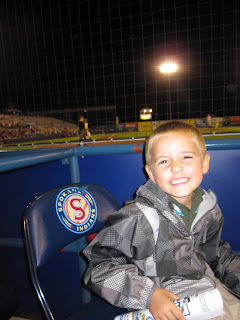 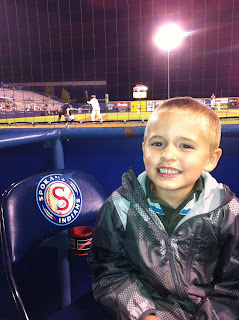 I'm so grateful to my Dad for getting tickets for us!

Because I'm trying to get better about taking them.  A family photo.  In the parking lot.  Better late than never. 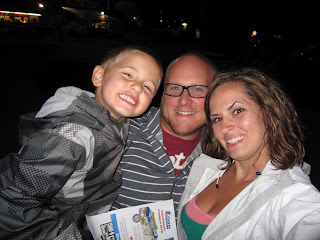 Also just because I got a laugh out of it.

On the way to the car, Brad and Preston took off running for the car.  Leaving this girl behind.  At that point of the day there was no way I was running anywhere.  Expect to bed.  Thank you very much.  At first I was feeling a little lonely walking in the back all by myself.  Until I realized, I had the keys.  I win boys!

Sounds like such a great night! I'm soo bad about taking family pictures as well. I think we have like 5 total of the 4 of us, hahah