Brad dropped me and Preston off at the office with Jessie and Mason so that we could head out for vacation!

Honestly I'm a little bit shocked we were able to fit everything in my sister's car. There was so much stuff. And not nearly as much space. But we did it! Have I ever mentioned I am the queen of making everything fit? It's kind of a talent.

Why did we take my sister's car? 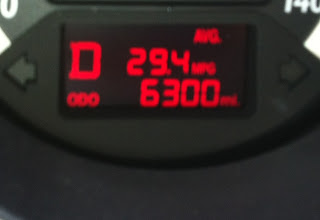 Yeah. The Murano doesn't get nearly that kind of gas mileage!

Plus since my Mom really wanted all of us to go but didn't want to make the drive again she gave us gas money for there and back and in Jessie's car we were able to make the gas money work where in mine we wouldn't have even gotten half way there before we had run through it!

The drive itself wasn't too bad.  We left a little later in the afternoon and knew that we had to make it to Klammath Falls in Oregon since we'd rented a hotel room there for the night.

We planned on just making a few pit stops for the boys and hoped that since we'd left later in the day they had gotten all of their wiggles out before we left and wouldn't hate being trapped in the car!

The worst part of the first day of driving for me was that Jessie was exhausted.  She'd gotten up early and worked all day and was just getting over a kidney infection so I did most of the driving.

When she finally woke up I told her we had to find somewhere for me to pee fast and that I had to go so freaking bad I was almost considering pulling over and just peeing on the side of the road.  ALMOST!  I'm not that crazy!

We did end up pulling off on an exit that had a sign saying there was a gas station.  BUT once we pulled off it was just really crazy dark.  No lights anywhere and no cars but us.  We got to the end of the off ramp and looked left, the direction the gas station was supposed to be, and it was just a dark road that led through a tunnel and twisted around. It was like the scene in a horror movie where you yell at the main characters to turn around.   We listened.  I opted to hold it and we got back on the highway!

Thank God there was a giant truck stop only about ten more minutes down the road!

We checked into the hotel, grabbed what we needed for the night, and brought our tired and now awake from all the commotion boys in and we all passed out!

I wish I could say we were up bright and early the next morning.  Not so much.  We were freaking tired!  We didn't check into the hotel until after 2am so we rested up.  Then loaded up.

Jessie's phone hadn't been working so we stopped to fix. Then had to find coffee.  Got lost.  Found coffee.  Found lunch.  And finally actually got on our way!

Everything was going great...at first.

We had the windows down and were enjoying the fresh air as we drove through the mountains.  When Mason started screaming.  Like full hysterics.  We couldn't figure out what was going on.  Until Preston told us that Mason was screaming because he'd dropped Batman out his window.  While Jessie was promising Mason that she would buy him a new Batman, Preston was putting it together that Mason had dropped HIS Batman out the window.  By that point they were both screaming.  It was horrible.  I actually thought about jumping out of the window at that point.

Eventually they both got over Batman's demise.  And we went back to having a good car ride.

Preston played some games on his iPhone. 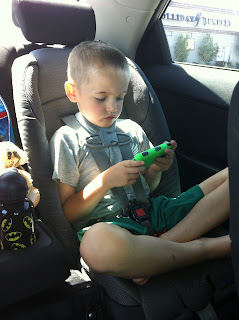 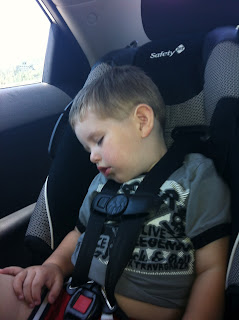 Even though we had a great drive down by the time we got to my Grandma's we were all excited to get out of the car!