We grabbed lunch at Denny's today. Don't ask me why. I'm not a fan. But my sisters are. It seems to be something that we just do whenever we are in California. Again I don't know why.

While we were waiting to be seated, Preston was asking for money to play the machine that has the claw and all the prizes below it. You know the one. Nobody every wins. Or almost nobody ever wins. My Grandma does. But no one else ever does. And my Grandma wasn't there.

So I let Preston play twice. He didn't win either time.

Then Marrissa took a turn. She didn't win either.

Only when she played the second time she told Preston that she would try to win a prize for him. It grabbed onto the Batman that Preston kept trying to win. The prize that he wanted. And it held onto Batman. All the way over to the drop! 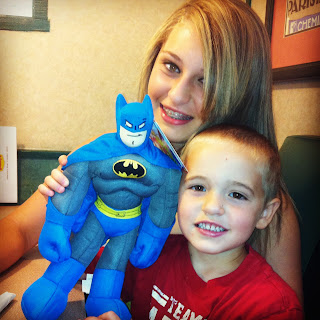 Literally right after I'd told Preston that it couldn't be done and no one wins on this game.