It's my birthday!!  Oh yes it is.  The big 25.  A whole quarter century.  So while my phone and Facebook went crazy with birthday wishes (I was definitely feeling the love!) we headed out for the day to play.

We decided to go to Ballard Locks for the morning.  It was nice out and we got there just in time to watch them load one of the areas full of boats.  The only other time me and Preston have been they weren't very busy and only had one boat in at a time.  This time there were like four and all of them were big.  It was fun to watch. 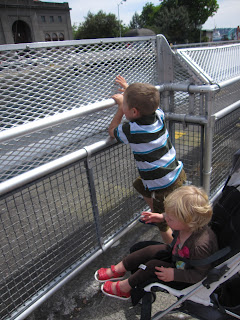 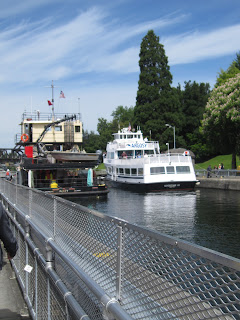 At least for a few minutes.  And then the kids were over it.

Preston did want to take a picture with all of the water.  Kid loves him some water.  Especially water falls. 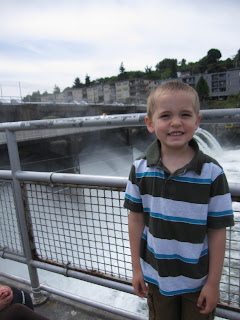 We went inside to see the salmon and ran into the problem of a field trip being there.  They were listening to a presentation so I had to do my best to entertain them up top since they just wanted to go down to the windows to see all of the salmon swimming.

Bring on the penny machine.  Preston loves these machines.  He loves getting to pick the design and then smash the penny down and see the end result.  Madison was pretty fascinated by the whole process as well.  Apparently penny machines are quite the hit. 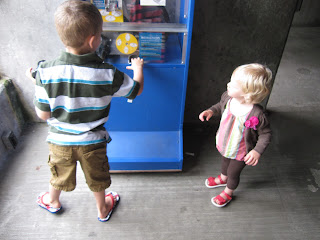 Finally we could head down to see the salmon swimming.  The last time we were here there were none.  This time there were a lot of them.  I wish I could remember what kind because I looked and was telling Preston and Mads about them but at this point I can't remember for the life of me.  I'm thinking that they might have had more fun sitting up on the platform by the salmon than they did actually seeing the salmon. 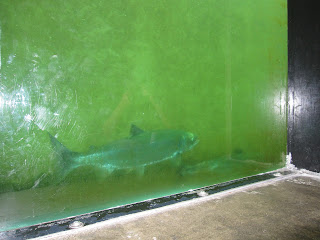 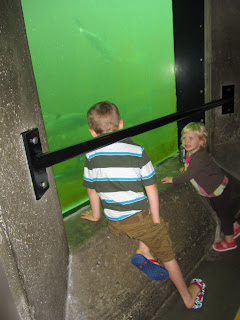 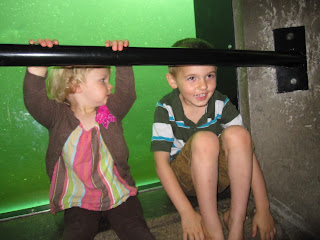 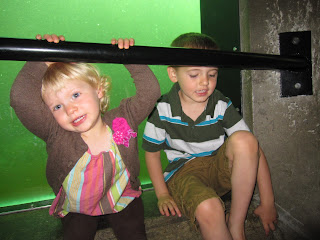 When we were done with the salmon, we headed back up to get Mads a penny from the machine.  Preston insisted that she needed one of her own.  My sweet boy. 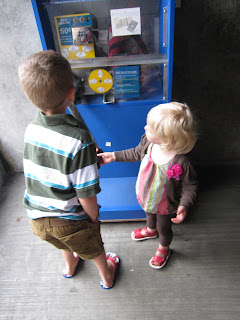 Preston got to see this bridge lifting up on our way back to the car.  He loved listening to how the bridge lifts up to let really tall boats go under it. 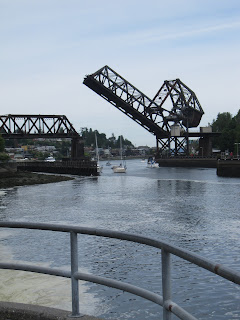 Somehow the kids got distracted by the big hill.  And we ended up stopping to play.

They both raced up and Mads got stuck so I headed up to help her out.  And then Preston started rolling down the hill.  At first by accident and then again because it was so much fun he did it again.  Only this time more controlled and not so crazy.  So then Mads had to do it too.  Only her version involved sliding down on her butt. Much safer. 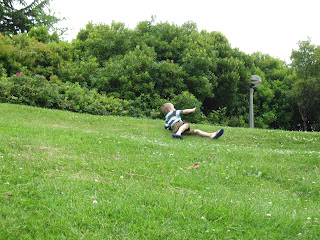 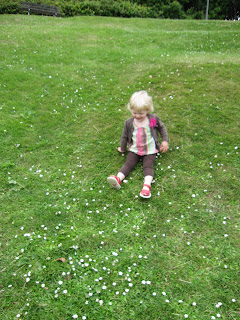 Then the two of them started jumping down the different levels of the hill.  Making me a nervous wreck.  I was positive that one of them was going to land on their face.  Luckily we all survived.  And neither of them got hurt!  Score! 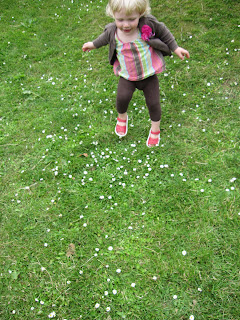 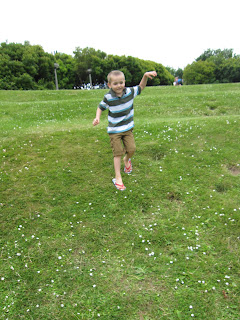 The plan orignally was to head from Ballard Locks to Golden Gardens Park but by the time we got there Miss Mads had fallen asleep and I couldn't find parking so we headed back to the house for a late lunch.

And then while Mads took her nap Preston and I took full advantage of what a gorgeous day it was and played outside on the deck.  In case you were wondering my army men won a few battles.  Which is no small fete.  Preston likes to make up all sorts of rules when you play with him, most of which make it impossible for anyone but him to win.  I'm sure he only let me win a few times because it was my birthday!

We rounded out the day with Mexican food.  My favorite kind of food. And this girl had a birthday margarita!  YUM!  And a big thanks to Jen for taking me to dinner for my birthday!