We finally got Preston's t-ball pics back! There was some confusion about where they were supposed to go. I thought they would be at one of his games for us to pick up. But instead the YMCA had them at the one closest to us. So when I called to find out what was going on they told me that had them and had been wondering what to do with them?

Either way we have them now!

They did the photos at the very first practice/game. And right before the game. So nobody knew each other yet and Preston and a lot of the other kids were just not sure at all about the whole thing.

Exhibit A, check out Preston's face in his team photo! I was dying. He absolutely refused to smile no matter what. It was a big deal that we even got him to stand there with a bunch of strangers! 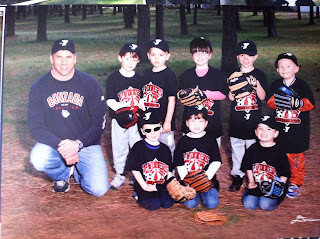 Luckily he recovered by the time they were ready to take his individual photo.  Look at how adorable my little t-ball player is! 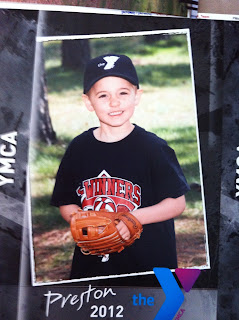 I love that we now have his official t-ball photos!