It was just Preston and me, as Madison was at swim lessons and spending the morning with a family friend, so we decided to head to the Pacific Science Center to explore.

We had to wait in what he seemed to consider a ridiculous line first to buy tickets, but then we were off!

We started in the dinosaur room.  Preston was fascinated and asked questions about all of the different dinosaurs.  I even got him to pose with one. Not his favorite one but the one that was most easily photographed with him as there were kids everywhere! 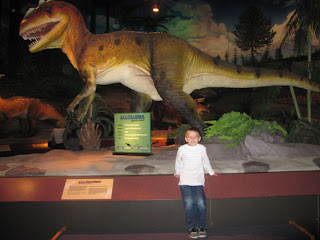 Preston's favorite part of the PSC though is the butterfly room.  We've only been one other time and he was little so I'm not sure if he remembers it or not.  But he is just plain old obsessed with butterflies.  He loves holding them.  Unfortunately for Preston here they weren't as easy going about picking up eh butterflies as they were at the Oregon Coast.  Probably because the foot traffic here is a lot higher.  But we managed to find a loophole.  You weren't allowed to pick them up BUT if they landed on you that was okay.

So we waited and waited and waited some more.  And Preston was oh so patient.  Finally one of the butterflies walked on by and decided his finger and then his hand and arm were a good place to hang out.  Preston was so thrilled.  I love seeing my normally energetic and bounce all over the place little boy stand so still and patient!   And having it pay off! 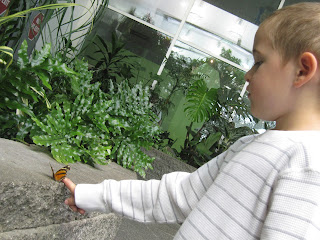 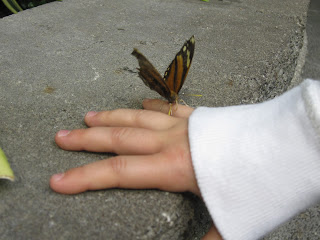 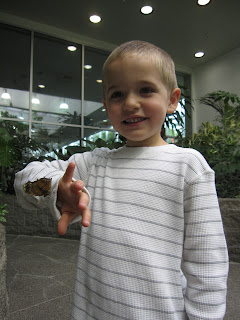 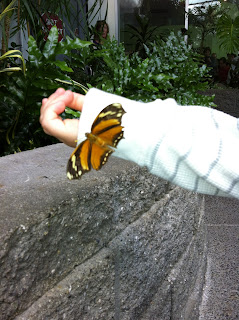 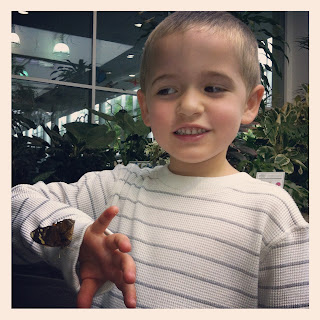 While exploring we found some tide pools.  And a water table.  No surprise there.  Preston is such a water kid that I would have been shocked if he hadn't found them.  And gotten wet in them. 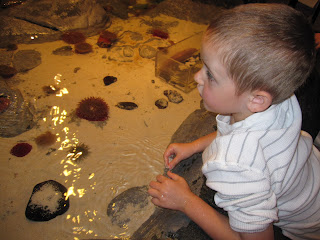 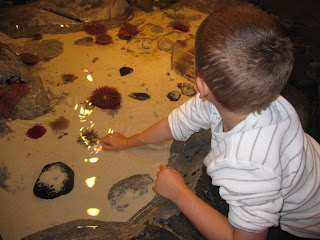 We had to run out and pay our meter since our time was about to expire but after heading back in and making our way to the building where they were going to be playing our laser show we made a few stops along the way to play with the outside water toys and learn a thing or two. 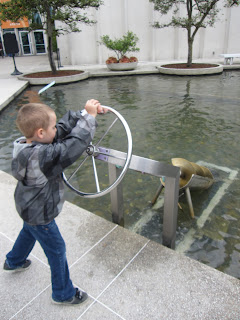 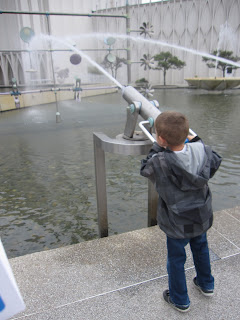 We saw the "Beatles" laser show.  At first I was a little worried that Preston wasn't going to enjoy it.  He was all excited and then they shut the lights off and the music started and he kept asking when it was going to be over and it had just started.  But a few minutes in when the designs got a little better and the music didn't seem so loud or the room so dark we were good.  And he really enjoyed it.

Funny story, when I bought our tickets to the laser show I thought the show was going to be about beetles.  As in the bug.  And I wasn't completely sure how that was going to work but I figured Preston is pretty into bugs so he would enjoy it.  And then it took me until the very end to realize that they just meant that the show would play The Beatles while they did the designs.  In fact I'm a little ashamed to admit that I didn't realize it until they wrote out "The Beatles" at the very end.

After the laser show we headed back to Jen's to hang out with Debora and wait for Miss Madison to wake up from her nap.

Once Madison was up she was off to spend some time with her Daddy, and Preston and I headed back down to the PSC with Jen to explore the King Tut's exhibit.  Seattle was it's last stop in North America and history is just so fascinating to me so there was no way to pass it up!

While Jen and I were pretty interested in all of it and where it came from and the history behind it, Preston was only interested for the first few minutes and then he was over it. And ready to go.  Which meant entertaining him while trying to take it all in and see everything without rushing too much.  Probably not the best idea to bring him but I for some reason thought he would enjoy it.  He didn't.

But me and Jen did.  And here are some of the photos from it.  We weren't allowed to use a flash and half of these were taken with my phone and it was kind of dark so getting good photos were a little hit and miss. 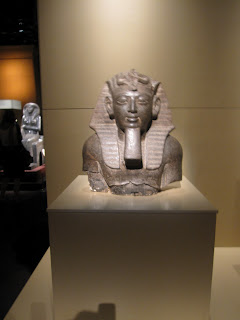 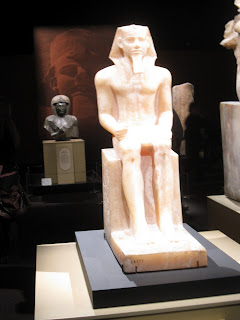 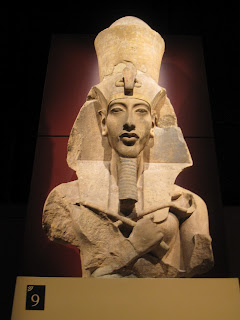 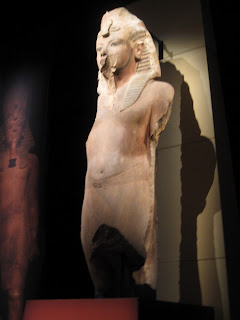 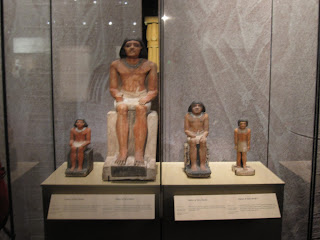 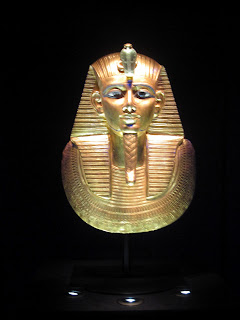 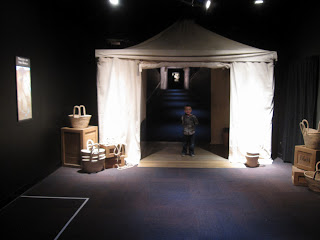 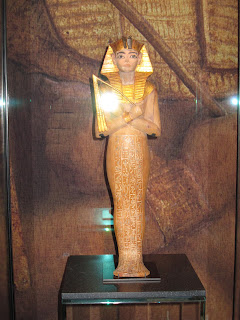 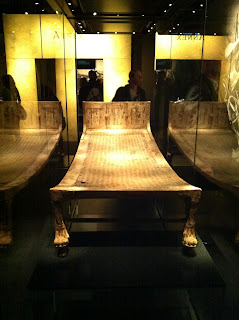 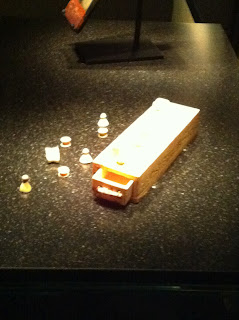 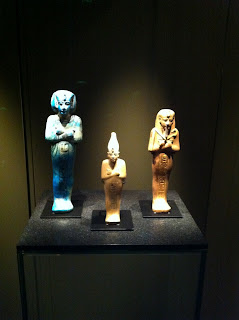 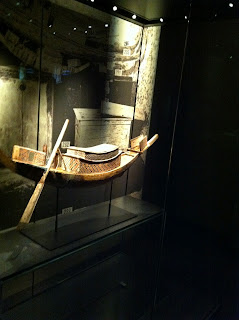 We were a little disappointed because King Tut and his actual tomb or case or whatever it's called weren't there.  And we were really looking forward to seeing the Mummy and the cases.  And all of that really cool stuff.   Thinking back on it I totally understand why it doesn't travel around for exhibits.  But when you hear King Tut's tomb you think King Tut!  But apparently he has never left Egypt.  I did not know that!

They did have this replica.  It said it's the only full scale life like replica of King Tut so it was pretty cool.  And whoa he was small! 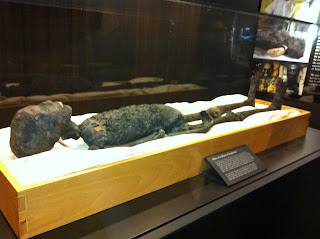 And then at the very end they had this moveable camera that if I remember what I read right was hooked up inside the tomb where King Tut actually is so you could the actual tomb. 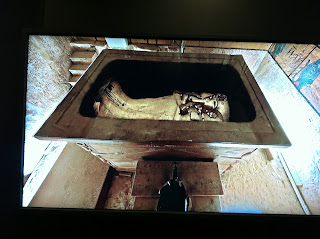 All in all, we had a fun day! And finished it off at Preston's favorite restaurant, Red Robin down on the water. Two of his favorite things. He loved eating his mac and cheese and watching the boats and ferries.

sounds like such a fun time. How neat that a butterfly landed on Preston!