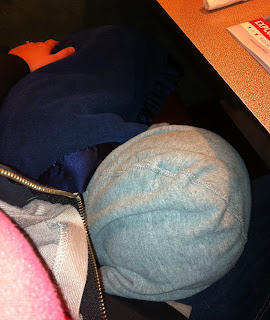 After Sarah's graduation we went to grab food because we were starving and hadn't had dinner. But it was late. Hence the starving. And Preston had played hard at my Aunt and Uncle's house so he was exhausted. So exhausted I probably shouldn't have taken him in and should have taken him to bed. But I was so freaking hungry. And I didn't have my own car and everyone was going to Denny's to get food. So we went too.

And Preston was asleep before we even ordered. We sat down in the booth and he stretched out and laid his head on my lap. And he was out.

He slept through the whole meal. And the car ride home. And me putting him to bed.

He was tired. Now I know better.