Preston and I took off on a last minute trip to California with my Mom.

It wasn't exactly an exciting last minute road trip. My Great Grandma fell and did something to her back and then while she was in a rehabilitation center for that she had a stroke. My Mom was freaking out, for good reason, and kept going back and forth on whether or not to head down there. After much debating back and forth she decided to go. And she planned on driving since such a last minute plane ticket cost an arm, a leg, and your first born. And as her first born I just put my foot down! Ha! I didn't want her to make the drive alone so we rearranged some things and me and Preston took off with her.

Preston's missing his last day of preschool and his class picnic but we figured big picture was my Mom needed to see her Grandma and I didn't want her going alone. Plus we didn't miss Preston's end of the year preschool concert.

The drive down was nothing special. We left early in the morning. And by early I mean we planned on leaving at 7am and rolled out of town at more like 8:30am. Oops.

Made a few pit stops along the way.

The coolest one being this canyon. I've never noticed it before. Which is crazy because I've made this drive like once or twice a year for the last nineteen years.

It's huge. And beautiful. And Preston loved it. Plus he got to get out and stretch his legs on the pathway from the parking lot to the viewing area.

It was also a little scary. It was deep! Really deep! And Preston wanted to see which meant I had to pick him up and steer away from even getting close to the wall keeping people from falling in. But he got to see the view and the little stream running down at the bottom. All from the safety of Mommy's arms. 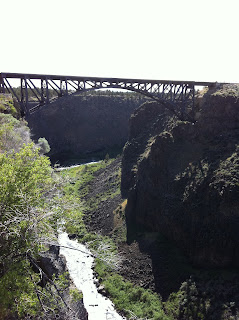 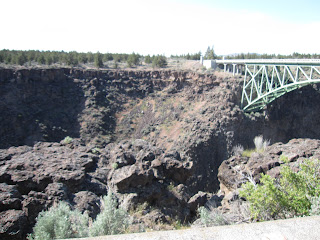 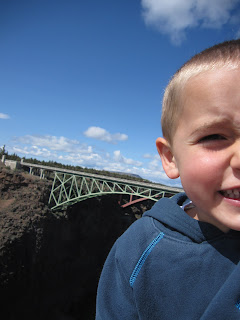 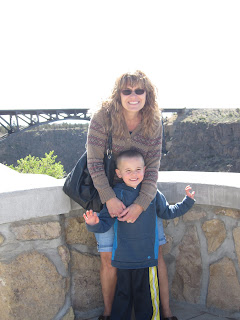 We drove for eleven and a half hours the first day.  It was a little rough at the end.  I think we all wanted out pretty bad.

And it only got worse because we checked into the hotel and then instantly headed to grab dinner.  Poor Preston was so over having to sit down.

Luckily for him the hotel had a twenty four hour pool.  So we went swimming.  And burned off some energy! 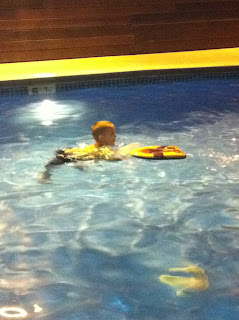 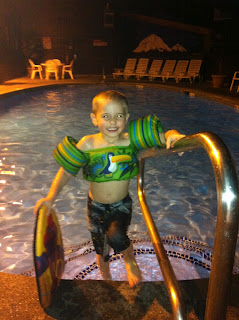 The second days drive was much easier.  Probably because it was much shorter.  Not even half as long as the first day.  Plus once we got there we got to get out of the car!