Preston woke up early in our bed recently and asked for some orange juice. I was exhausted and hoping for some more sleep so I headed upstairs to grab him some orange juice with the intention of getting it to him before he woke up all the way so that then he'd lay back down and fall back asleep. Hey, it works sometimes. What? My bedroom is dark and sometimes I can convince him that it's not quite morning time yet. That's not wrong, sleep is good for you!

As I'm heading back into the room Preston says to me "boogers keep coming out of my nose!" and he is very distressed by it. I don't think much of it until I get closer. And then I realize his face looks a little funny but I can't tell why. It's pretty dark in there remember.

I turn on the lamp on my nightstand and almost have a heart attack. In fact if Preston hadn't said anything about his "boogers" I probably would have had a heart attack. But because he'd mentioned the boogers coming out of his nose I was able to put it together and realize that Preston was in the middle of a bloody nose rather than having been attacked while we were sleeping. That would be a good thing. Even if it did take me a minute to realize. What? I was really tired!

And I mean really, what does this picture scream...bloody nose or a serial killer broke into the house last night? 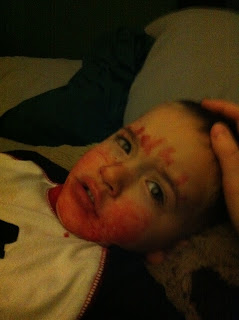 But the good news is nobody died as a result of someone breaking into our house to kill us. It was just a bloody nose!