This was the first year that Preston was actually a willing participant in visiting Santa. He was excited even.

Armed with the list that we had made we headed to the mall to have lunch and head down to meet Santa.

And be robbed. They charged me almost $25 for Preston to get his photo taken with Santa! And that was only for a 5x7! Then they gave me some spiel about how we would also be able to download a digital copy on their website. And when I went to check that out thinking, score maybe this wasn't so bad. I realized they wanted to charge me even more for that! Yeah, no.

Whew, now that I got that off my chest.

Preston waited fairly patiently in line for his turn and when it was his turn he hopped right up on Santa's lap and opened his list up and started telling Santa about it.

It was sooooo cute!

I obviously took pictures of Preston and Santa discussing his list because it was so adorable! 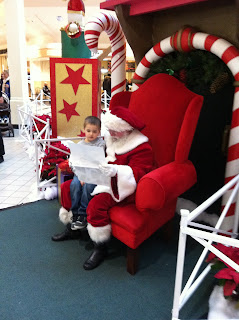 Then Preston smiled real big for the main event. 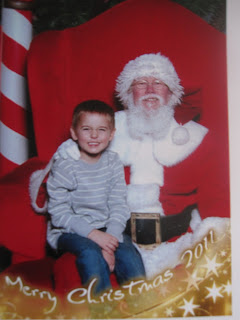 And after good-byes were said to Santa we were on our way. There was Christmas shopping to be done. And a frame at home waiting for the photo of Preston and Santa to make it complete!