Another Twilight movies midnight release! Don't act surprised, this was not my first midnight release. There was New Moon. And then Eclipse. And now Breaking Dawn Part One.

I didn't see the first actual Twilight movie at the midnight release because I hadn't read the books and wasn't all that into it then. BUT I did see it opening weekend, but only because we went out to celebrate Brad's birthday and he got to pick the movie and the poor guy thought it was your typical vampire movie. Let's just say he was not thrilled when we left the theater. Honestly neither was I until I read the books months later!

Me and Nicole met early and made a night of it grabbing a drink and appetizers before heading across the street to the theater!

We got a little bit distracted on the way up to the movie by a cardboard cutout of Edward, Bella, and Jacob. This has happened once before with a different cutout at a different midnight opening. I don't want to talk about it! Ha! 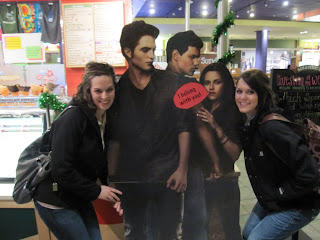 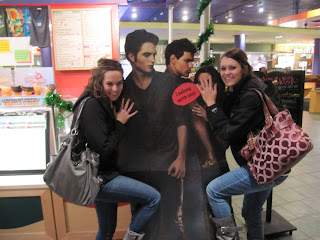 Our friend Holly had gotten there earlier than me and Nicole and saved us seats because she is awesome! And they were good seats! Like right in front of the bar seats. Meaning not only was no one in front of us and we could put our feet up on the bar, but also that when we had to go to the bathroom or grab more snacks we just had to hop over the bar instead of trying to sneak past everyone. 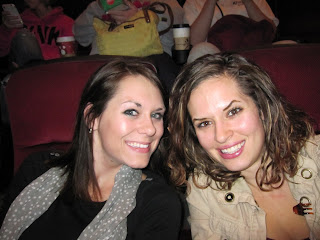 The movie was awesome! Probably one of my favorite ones yet! I love that they split it into two this time, it meant that they got to cover soooo much more!

I even loved it so much that I went and saw it again with my parents and brother and sisters on Saturday!

Now I just have to wait a whole 'nother year for the last one!