I love helping out in Preston's class. Love it. The fact that the parents are required to help out is one of the reasons that I chose this preschool. It helped ease my nerves a little bit about sending my baby off to be a big boy to know that what was happening at school wasn't secretive. And in fact was the exact opposite in that parents are fully invited to come in and be a part of whats happening.

I love watching Preston interact with all of the other kids. And seeing who his friends are. And what his favorite toys are at school on my volunteer days. Don't get me wrong I ask him about his day when I pick him up from preschool but the summary I get doesn't always tell me a whole lot about what he learned or how the day went. But when I'm there I get to see it all firsthand.

His day starts out with morning circle time and then heads right into free learning time. They have a couple of different activities going on and he gets to move around to the different things he wants to do. There is an art project, a table to practice writing your name, typically a letter of the week project, and all of the free play areas. 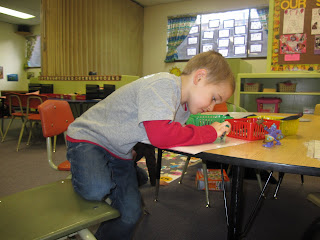 Preston isn't as into arts and crafts as some of the other kids so I've both seen and been told that getting him over to those projects takes some creativity! He is however very into the play area with the knights and castles. He loves those knights! And a couple of the other boys in the class are right there with him in that department. 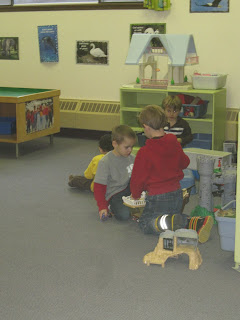 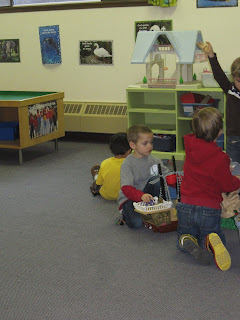 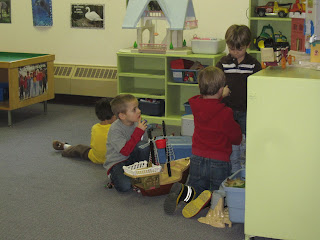 And on Tuesdays Preston has his show and tell day. Some weeks we bring something that starts with the letter that week and other weeks Preston has his mind set on something and he brings that instead. This week Preston brought his Iron Man car! 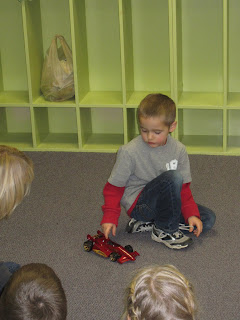 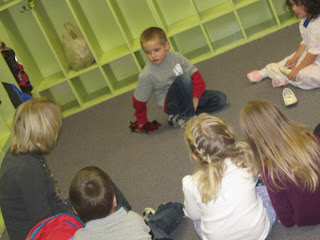 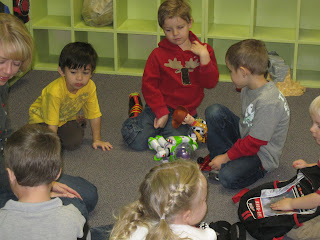 After free time the kids all head to the second circle time of the day. During that circle time the two snack helpers are excused to help set up snack for that day. I got to help out on one of Preston's snack helper days and it was so cute to watch him very seriously set out the cups and napkins for all of his classmates!

Then it's time for snack. I have to say that snack time at preschool is definitely helping Preston out in the eating department. Granted they are just snacks and not full meals but still he is trying new foods! Like for example raisins are now one of his favorite snacks. And he is now willing to eat graham crackers! He's such a picky eater I'll take any willingness to eat snacks that aren't candy and chips I can get! 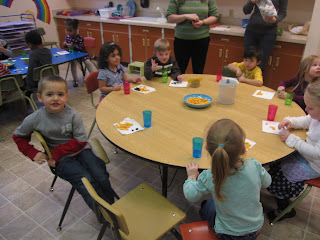 After snack they head outside. Or up to the gym depending on how cold it is. Preston loves either of these. And I'm glad that no matter what the weather he gets a chance to race around and get some of his energy out! 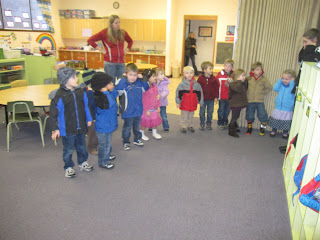 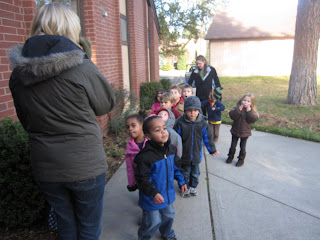 On Tuesdays they follow up "recess" time with a project back in his classroom. And on Thursdays they head into the chapel for some time learning songs and the stories of the Bible.

There is one final circle time to end the day and preschool is over.

I can't say enough how much me and Preston are both loving his preschool! I love his teachers and the effort that they put in with him! And he loves them too! I love helping out and getting a chance to see first hand what his days there are like! I love the different things they do for the families. I was so incredibly nervous about preschool and it's nice to be able to breathe a giant sigh of relief that we are both enjoying this experience so much!

So cute! I'm taking M to a preschool open house tomorrow and I just want to cry! When did they get so big?